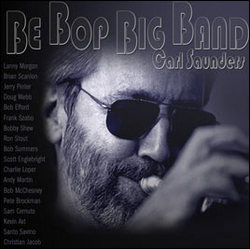 Born in Indianapolis, Indiana, his first five years were mostly spent on the road. His uncle was trumpeter-bandleader Bobby Sherwood, who was riding high with the popular Sherwood Orchestra, having hits with Elks Parade and Sherwoods Forest. Saunders mother Gail (Bobbys sister) sang for the Sherwood Orchestra and Stan Kenton, among others. When Carl was five, he and his mother settled in Los Angeles; living with Carls aunt Caroline and her husband, tenor-saxophonist Dave Pell. At the time, Saunders heard the records of the Dave Pell Octet and was influenced by the style and phrasing of trumpeter Don Fagerquist.

Saunders began playing trumpet in the seventh grade and he quickly found that he had a natural ability, mostly learning to play by ear and never having any lessons. He played in school bands, and after he graduating high school, his mother helped get him a job with Stan Kentons Orchestra. Saunders auditioned for Kentons band and was given a choice: wait for the first opening in the trumpet section or join the band the following week as a member of the mellophonium section. He chose the latter and spent much of 1961-62 on the road with Stan Kenton. Says Saunders about the experience with the mellophonium band: I had developed a perfect pitch. However, once I joined Kenton to play the mellophone, my whole system got mixed up, because the notes that I read sounded higher than what I was used to.[1]

After spending part of 1962-63 traveling with Bobby Sherwoods group (playing drums), Carl Saunders settled back in Las Vegas where during the next 20 years he played with a countless number of show bands, including lead with Ella Fitzgerald, Tony Bennett, and Frank Sinatra. Saunders also traveled as a lead player with Paul Anka and Robert Goulet and with such bandleaders as Si Zentner, Harry James, Maynard Ferguson, Benny Goodman, Dan Terry and Charlie Barnet.

In 1984, Carl Saunders moved to Los Angeles where he was soon playing lead trumpet with Bill Holmans Orchestra, a position he still holds. Saunders has also worked with Supersax, the big bands of Bob Florence and Gerald Wilson, and the Phil Norman Tentet. In 1994, he became a member of the Dave Pell Octet (in Don Fagerquists old chair). In addition, he is often heard at the head of his own groups including the Carl Saunders Big Band, his sextet and a quartet.

Carl Saunders, who enjoys working with kids and conducting clinics, plans to continue playing the straight ahead jazz that he loves most.

This article uses material from the article Carl Saunders from the free encyclopedia Wikipedia and it is licensed under the GNU Free Documentation License.