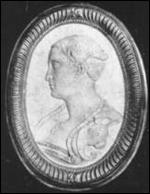 Francesca Caccini (18 September 1587 after 1641) was an Italian composer, singer, lutenist, poet, and music teacher of the early Baroque era. She was also known by the nickname "La Cecchina", originally given to her by the Florentines and probably a diminutive of "Francesca".[1] She was the daughter of Giulio Caccini, and was one of the best-known and most influential female European composers between Hildegard of Bingen in the 12th century and the 19th century. Her stage work, La liberazione di Ruggiero, has been widely considered the first opera by a woman composer.

Caccini was born in Florence, and received a humanistic education (Latin, some Greek, as well as modern languages and literature, mathematics) in addition to early musical training with her father. Her first recorded appearance in public is as a singer in the all-sung stage works her father composed for the wedding of Henry IV of France and Maria de Medici in 1600. In 1604 when the entire Caccini family visited France: Henry praised her singing effusively—"you are the best singer in all of France"—and asked her to stay at his court; however the Florentine officials denied his request, and she returned to Italy, where she taught, performed and composed from her father's home. In 1607 her composition of a Carnival entertainment entitled La stiava seems to have led to her hiring as a musician in the service of the Medici court. That same year she married fellow court musician Giovanni Battista Signorini, with whom she would have one child, Margherita, born in 1622.

In her early life, Caccini performed with her parents, her half-brother Pompeo, her sister Settimia, and possibly other unnamed Caccini pupils in an ensemble contemporaries referred to as le donne di Giulio Romano. After she was hired by the court, she continued to perform with the family ensemble until Settimia's marriage and resulting move to Mantua caused its breakup. Caccini served the Medici court as a teacher, chamber singer, rehearsal coach and composer of both chamber and stage music until early 1627. By 1614 she was the court's most highly paid musician, in no small part because her musical virtuosity so well exemplified an idea of female excellence projected by Tuscany's de facto Regent, Granduchess Christina of Lorraine.

Caccini is believed to have been a quick and prolific composer, equal in productivity to her court colleagues Jacopo Peri and Marco da Gagliano. Very little of her music survives. Most of her stage music was composed for performance in comedies by poet Michelangelo Buonarroti the younger (grand-nephew of the artist) such as La Tancia (1613), Il passatempo (1614) and La fiera (1619). In 1618 she published a collection of thirty-six solo songs and soprano/bass duets (Il primo libro delle musiche) that is a compendium of contemporary styles, ranging from intensely moving, harmonically adventurous laments to joyful sacred songs in Italian and Latin, to witty strophic songs about the joys and perils of romantic love.

In winter 1625 Caccini composed all the music for a 75-minute "comedy-ballet" entitled La liberazione di Ruggiero dall'isola d'Alcina that was performed for the visiting crown prince of Poland, Ladislaus Sigismondo (later Wadysaw IV). Combining witty parodies of early opera's stock scenes (and self-importance) with moments of surprising emotional intensity, the score shows Caccini to have mastered the full range of musico-theatrical devices in her time, and to have had a strong sense of long-term musical design. La liberazione... so pleased the visiting prince that he had it performed in Warsaw in 1628.

After Caccini's first husband died in December 1626, she quickly arranged to marry again in October 1627, this time to a bachelor, melophile nobleman in Lucca, Tommaso Raffaelli. She lived in Raffaelli's Lucchese homes, apparently bearing a son and having some musical relationship to the Buonvisi family in Lucca, until his death in 1630. Although as the wife of a nobleman she had declined at least one request to perform (in Parma, in 1628), once she was widowed Caccini immediately tried to return to Medici service. Her return delayed by the plagues of 1630-33, by 1634 Caccini was back in Florence with her two children, serving the court as music teacher to her daughter Margherita and to the Medici princesses who lived at or frequently visited the convent of La Crocetta, and composing and performing chamber music and minor entertainments for the women's court. Caccini left Medici service on 8 May 1641, and disappeared from the public record.

Francesca Caccini wrote some or all of the music for at least sixteen staged works. All but La liberazione di Ruggiero and some excerpts from La Tancia and Il passatempo published in the 1618 collection are believed lost. Her surviving scores reveal Caccini to have taken extraordinary care over the notation of her music, focusing special attention on the rhythmic placement of syllables and words, especially within ornaments, on phrasing as indicated by slurs, and on the precise notation of often very long, melodically fluid vocal melismas. Although her music is not especially notable for the expressive dissonances made fashionable by her contemporary Monteverdi, Caccini was a master of dramatic harmonic surprise: in her music it is harmony, more than counterpoint, that most powerfully communicates affect.

This article uses material from the article Francesca Caccini from the free encyclopedia Wikipedia and it is licensed under the GNU Free Documentation License.