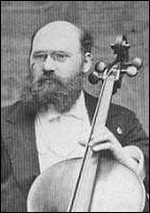 Fitzenhagen was born in Seesen in the Duchy of Brunswick, where his father served as music director. Beginning at age five, he received lessons on the piano, the cello and the violin. Many times, he had to substitute for wind players absent due to various emergencies.[1] At 14, Fitzenhagen began advanced study of the cello with Theodore Müller. Three years later Fitzenhagen played for the Duke of Brunswick, who released him from all military service. In 1867 some noble patrons enabled him to study for a year with Friedrich Grützmacher in Dresden,[2] A year later he was appointed to the Dresden Hofkapelle, where he started his career as soloist.[3]

Fitzenhagen's playing at the 1870 Beethoven Festival in Weimar attracted the attention of Franz Liszt, who had formerly served as music director there. Liszt attempted to talk Fitzenhagen into joining the court orchestra. Fitzenhagen, however, had already accepted a professorship at the Moscow Conservatory.[1] Fitzenhagen became regarded as the premier cello instructor in Russia and equally well known as a soloist and chamber music performer.[3] He was appointed solo cellist to the Russian Musical Society and director of the Moscow Music and Orchestral Union. It was through this union that he made many concert appearances as a soloist.[1] He formed a friendship with Tchaikovsky, giving the first performances of all three of that composer's string quartets as well as the Piano Trio as a member of the Russian Music Society's quartet.[3]

Fitzenhagen trained a number of excellent cellists, including Joseph Adamowski, who went to America in 1889 to join the newly formed Boston Symphony Orchestra and helped found the orchestra's pension program. Adamowski also formed a string quartet named after him and taught at the New England Conservatory in Boston.[4]

Fitzenhagen and the Rococo Variations

Fitzenhagen gave the first performance of Tchaikovsky's Variations on a Rococo Theme, which was dedicated to him, on November 30, 1877. The composer had already allowed his soloist a great deal of freedom in modifying the solo part, but Fitzenhagen chose additionally to alter the sequence of variations, possibly for the opportunity of soloistic display.[1] The D minor variation which had been third in Tchaikovsky's original order was switched with the seventh and an eighth varition dropped altogether. Fitzenhagen may have felt justified by these efforts by the audience reaction after a performance at the Wiesbaden Festival in June 1879, writing to Tchaikovsky, "I produced a furore with your variations. I pleased so greatly that I was recalled three times, and after the Andante variation (D minor) there was stormy applause. [Composer Franz] Liszt said to me, 'You carried me away! You played splendidly,' and regarding your piece he observed: 'Now there, at least, is real music.'"[6]

How seriously Tchaikovsky may have viewed Fitzenhagen's more radical alterations is difficult to say. After the cello and piano arrangement appeared in Fitzenhagen's ordering of variations in 1878, Tchaikovsky complained to his publisher P. Jurgenson that Fitzenhagen had proofread the piece badly.[6] Later, however, he may have come to regret Fitzenhagen's license with the piece more negatively.[6] When cellist Anatoliy Brandukov approached Tchaikovsky just before the full score was published in 1889, he found the composer "very upset, looking as though he was ill. When I asked: 'What's the matter with you?' Pyotr Ilyich, pointing to the writing table, said: 'That idiot Fitzenhagen's been here. Look what he's done to my piecehe's altered everything!' When I asked what action he was going to take concerning this composition, Pyotr Ilyich replied: 'The devil take it! Let it stand as it is!'"[7]

Fitzenhagen's 1878 order was retained and the work became part of the standard repertoire.[1] The variations are still played in Fitzenhagen's sequence to the present day, despite the subsequent discovery and restoration of the composer's original order.[8]

Fitzenhagen wrote more than 60 works for the cello. These include four concertos, a suite for cello and orchestra, a string quartet and numerous salon pieces.[1] He won an award from the St. Petersburg Chamber Musical Union for his string quartet. However, few of these works have survived.[3]

This article uses material from the article Wilhelm Fitzenhagen from the free encyclopedia Wikipedia and it is licensed under the GNU Free Documentation License.