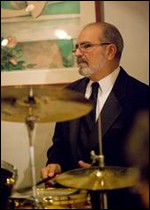 Marty Morell (born February 25, 1944) is a drummer, percussionist, vibraphonist and producer who played with the Bill Evans Trio for seven years - longer than any other drummer. Morell attended the Manhattan School of Music and studied mallets with Morris Goldberg, and tympani with Saul Goodman at the Juilliard School of Music. Prior to joining Bill Evans, he worked and/or recorded with the Al Cohn-Zoot Sims Quintet, Henry "Red" Allen, Gary McFarland, Steve Kuhn and Gábor Szabó.

...he had been responsible for an exceedingly tight unit that could swing and drive relentlessly. His control of the twelve-bar sections in a number like "Twelve Tone Tune", for instance, was as snappy and precise as coulld [sic] be. At the same time,on ballads, he never failed to provide a listening cushion of the utmost delicacy, seeming to imbue his drums with the ability to breathe of their own volition, and always in expressive union with his leader.

After leaving the trio, Marty settled in Toronto, Canada where he became a highly sought after studio drummer and percussionist. He fronted his own bands as a drummer and also worked as a vibist and pianist with his Latin band and played congas with the 1970s funk-jazz band Ravin'.[2] Morell has played on numerous jingles, films, and has worked and recorded with many jazz artists such as Don Sebesky, Stan Getz, Kenny Wheeler, Claus Ogerman, and Rob McConnell & the Boss Brass.[3]

Considered a highly versatile musician, Morell also performed with the Toronto Symphony, Canadian Opera Company, the Hamilton Philharmonic and the Royal Winnipeg Ballet and from 1989 to 1997 he was the percussionist with the Phantom of the Opera orchestra in Toronto. In 1998 he moved back to his hometown, New York City, to play the Tony award-winning musical Ragtime. After a two-year run on Broadway, he toured nationally with the show. Following that, he did the revival of Kiss Me, Kate, which won a Tony award for Best Musical revival 2001, and Seussical: The Musical starring Cathy Rigby.

He became the drummer with the Duke Ellington Orchestra in 2006, and in 2007 he was asked to be jazz drum set professor at the University of Central Florida.[4] In addition to that, he has been performing a Bill Evans tribute program with Japanese pianist Takana Miyamoto. In October, 2008 Morell toured Japan with the Ellington Orchestra and, while there, performed several concerts with Miss Miyamoto.[3]

Marty Morell currently teaches jazz drumset and percussion at the University of Central Florida (UCF) [5] and has been recording with The Jazz Professors a combo of the UCF faculty including saxophonist Jeff Rupert, bassist Richard Drexler, pianist Per Danielsson, trombonist Michael Wilkinson, and guitarist Bobby Koelble that has had two JazzWeek Jazz top-charting hit albums in 2011 and 2013.[6]

This article uses material from the article Marty Morell from the free encyclopedia Wikipedia and it is licensed under the GNU Free Documentation License.

Charles Hubert Parry An English Suite
Update Required To play the media you will need to either update your browser to a recent version or update your Flash plugin.