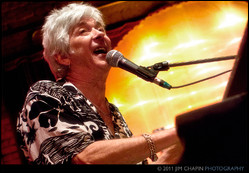 Ian William Patrick "Mac" McLagan ( /in mklæn/; born 12 May 1945, West Middlesex Hospital, Isleworth, Middlesex[1]) is an English keyboard instrumentalist, best known as a member of the English rock bands Small Faces and Faces.[1] He has also collaborated with The Rolling Stones and has been leading his own band since the late 1970s.

McLagan first started playing in bands in the early 1960s, initially using the Hohner Pianet before switching to the Hammond Organ and Wurlitzer electric piano, as well as occasional guitar. He was influenced by Cyril Davies' All Stars,[2] and his first professional group was the Muleskinners, followed by the Boz People with future King Crimson and Bad Company member Boz Burrell.[3] He joined the Small Faces in November 1965, replacing Jimmy Winston, and played his debut with them at London's Lyceum Theatre on 2 November that year.[4] In 1969, after Steve Marriott left the group and Rod Stewart and Ronnie Wood joined, the band changed its name to Faces.

Work with other musicians

After the Faces split up in 1975, McLagan worked as a sideman for The Rolling Stones, both in the studio, on tour and on various Ronnie Wood projects, including The New Barbarians. In addition, his session work has backed such artists as Chuck Berry, Jackson Browne, Joe Cocker, Bob Dylan, Melissa Etheridge, Bonnie Raitt, Paul Westerberg, Izzy Stradlin, Frank Black, Nikki Sudden, John Mayer, Bruce Springsteen[1] and Tony Scalzo. McLagan has been a member of Billy Bragg's band since 1997.

McLagan plays piano on the studio side of the album The London Chuck Berry Sessions.

On 25 September 2010, at Stubbs in Austin, Texas, McLagan joined The Black Crowes on keyboards and vocals for their encore set. The set included two Faces songs, "You're So Rude" and "Glad and Sorry".

Also in 2013, he appeared with the Warren Haynes' band at the Moody Theater in Austin Texas playing piano on one number and organ on the other.

Although McLagan has played with a number of famous musical acts over the years, there is at least one major group that he declined to play with. During a 2004 interview on the Fresh Air radio program McLagan was asked about being offered a job with the Grateful Dead.

"You declined a chance to play with the Grateful Dead. Why was that?"

"Well I didn't actually decline the chance... it was a chance; I wasn't given the gig. A friend of mine who was a friend of Jerry Garcia's said they're looking; their current keyboard player has died and they're looking for someone else. He said they want you to play to a tape and submit it, you know. He said, 'You could make a quarter million dollars a year, you could live anywhere you want, blah, blah, blah'. I was actually on vacation at the time in San Diego with my wife and our dogs and I went out and bought a Grateful Dead CD and my wife went out to do some shopping and came back to the hotel room and I was sitting in a blue funk in a brown study in a green swarm of hell and she said, 'What's the matter?' and I said, I can't play this music it sucks! I mean, just my personal taste, I couldn't didn't understand it, didn't get it, still don't really. I mean I know they make a lot of money, they've got of fans. I'm sorry if I've upset anyone but"

"Wasn't my cup of tea, no more than Phish all that jam-band so tediously boring. I like a tune, and a singer, and a solo, and now, more of the tune. I just couldn't even do it."[5]

McLagan has also released several solo albums. An in-demand player, he has filled the role of bandleader with his own Bump Band since 1977. He currently lives in Austin and does gig nights at local clubs and bars. Ian McLagan & The Bump Band played at the 2006 Austin City Limits Music Festival, and opened for The Rolling Stones in Austin, Texas in 2006.

McLagan developed a relationship with Kim Kerrigan, the young estranged wife of Keith Moon, drummer of The Who. She divorced Moon and lived with McLagan, and her daughter Amanda (from her marriage to Moon). The two married in 1978, one month after Moon died at the age of 32. Kerrigan died in a traffic accident near their home in Austin, Texas on 2 August 2006. She was 57.[6]

MacLagan is a devoted dog owner, and is particularly fond of greyhounds. In an interview with Creem magazine, McLagan commented, "I used to be the part-owner of a racing greyhound...poor thing. He came in last in every race, and the one time he came in fifth was because another dog dropped dead on the tracks." -Creem magazine, July 1975

He published an autobiography, "All the Rage: A Riotous Romp Through Rock & Roll History" in 2000.

This article uses material from the article Ian McLagan from the free encyclopedia Wikipedia and it is licensed under the GNU Free Documentation License.