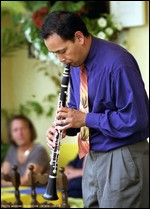 Evan Christopher (born August 31, 1969 in Long Beach, California) is an American clarinetist and composer based in New Orleans, Louisiana. Recognized mainly for a personal brand of "contemporary early-jazz, he strives to extend the legacy of the unique clarinet style anchored in the musical vocabulary created by early New Orleans clarinetists such as Lorenzo Tio Jr., Sidney Bechet, Omer Simeon, Barney Bigard, and Johnny Dodds.

His rst musical training was at the Idyllwild Arts Academy (then known as the Idyllwild School of Music and the Arts). After high school, he studied saxophone at the [[University of Southern California]] with Dr. Thom Mason and went on to graduate from California State University at Long Beach where he studied clarinet with Gary Bovyer. Early mentors include clarinetists Kenny Davern, Tony Scott,soprano saxophonist George Probert and bassist, Marshall Hawkins

Tours with singer-songwriter A.J. Croce in the early 1990s rst brought Christopher to New Orleans. He moved there in 1994 and enjoyed varied work before leaving to join the Jim Cullum Jazz Band in San Antonio, Texas in 1996. For nearly three years, he appeared nightly as their featured clarinetist and recorded several of their syndicated radio programs, Riverwalk Jazz. Christopher returned to New Orleans, but was forced to leave again in 2005 when the Federal levees failed in the aftermath of Hurricane Katrina. He traveled continuously and even based himself briey in Paris at the invitation of the French government. During this artist-residency, he formed his current groups, the Jazz Traditions PROJECT and Django à la Créole. The latter fuses Gypsy Swing with New Orleans grooves and rhythms of le monde Créole. U.S. tours with Irvin Mayeld's New Orleans Jazz Orchestra made it possible for Christopher to return to New Orleans where he has been permanently based since 2008. He is a charter member of jazz composer guild, NOLA ArtHouse Music as well as the Seahawk Modern Jazz Orchestra based in Southern California

Published research and presentations on the New Orleans clarinet style, and in 2002 initiated pursuit of a musicology degree at Tulane University. Although these studies were never completed, Christopher remains an advocate for the cultural workforce and music education. From 2008-2009, he taught part-time at the University of New Orleans where he coached a "New Orleans Music Ensemble" that performed alongside guest artists such as Lucien Barbarin and Marcus Roberts. As a composer, original songs appear on CDs such as "Delta Bound" featuring pianist Dick Hyman (Arbors, 2007), "The Remembering Song" featuring guitarist Bucky Pizzarelli (Arbors, 2010), and the Grammy-winning New Orleans Jazz Orchestra's "Book One." In July 2010, he debuted the "Treat It Gentle Suite," a concerto for clarinet and jazz band in the New Orleans style, with the Minnesota Orchestra.

As sideman or featured guest

This article uses material from the article Evan Christopher from the free encyclopedia Wikipedia and it is licensed under the GNU Free Documentation License.