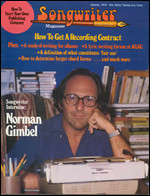 Norman Gimbel is an American lyricist of popular songs, television and movie themes whose writing career includes such titles as "Sway", "Canadian Sunset", "Summer Samba", "The Girl from Ipanema", "Killing Me Softly with His Song", "Meditation" ("I Will Wait for You"), along with an Oscar for "It Goes Like It Goes" - from the film Norma Rae. He was inducted into the Songwriters Hall of Fame in 1984.

A native of Brooklyn, son of businessman Morris Gimbel and Lottie Gimbel,[1] Norman Gimbel was self-taught in music and following initial employment with music publisher David Blum, progressed to become a contract songwriter with Edwin H. Morris Music. Small successes and moderate fame came as a result of lively novelty songs "Ricochet", which was popularized in a 1953 recording by Teresa Brewer from which was developed the 1954 Judy Canova film Ricochet Romance, and "A Whale of a Tale", sung by Kirk Douglas in another 1954 production, Disney's 20,000 Leagues Under the Sea. Greater success was earned with Dean Martin's recording of "Sway", which reached #6 on the UK Singles Chart, followed by his first big success, Andy Williams' rendition of "Canadian Sunset", which scored to #1 in 1956.

Top songwriter Frank Loesser became Gimbel's mentor and, through Loesser, he met composer Moose Charlap with whom he wrote the first of his numerous songs to appear in films, "Past the Age of Innocence", from the 1951 Monogram musical, Rhythm Inn.

At the end of the decade, he collaborated with Charlap on the only Broadway musicals for which he has written lyrics, Whoop-Up and The Conquering Hero. Whoop-Up is set within a modern-day Native American community located on a reservation. The novel which provided the basis for the show, Dan Cushman's Stay Away, Joe, was filmed ten years later, under its original title, as a vehicle for Elvis Presley, using an unrelated screenplay and score. The show's Joe was portrayed by Ralph Young, who achieved stardom in the 1960s and 70s as one-half of the singing duo, Sandler and Young. The production was directed by Cy Feuer and choreographed by Onna White who received a Tony nomination for her contribution to the show, with another nomination going to Julienne Marie for Best Featured Actress in a Musical. Cushman, along with Feuer and Ernest H. Martin, also wrote the book of the show. Eleven of the eighteen songs by Gimbel and Charlap were heard in the first act, and the remaining seven in act two. Whoop Up opened at the Shubert Theatre on December 22, 1958 and, despite some encouraging reviews, ended after a disappointing 56 performances on February 7, 1959.

The opening night of Conquering Hero was almost two years later, on January 16, 1961. The production, at the ANTA Playhouse, had a book by Larry Gelbart, based on Preston Sturges' 1944 screenplay and film, Hail the Conquering Hero. It was directed by Albert Marre, choreographed by Todd Bolender and starred Tom Poston as Woodrow Truesmith, the character originated in the movie by Eddie Bracken. Ella Raines' Libby was portrayed by Kay Brown, and Lionel Stander, as Sgt. Murdock, took over William Demarest's Sgt. Heppelfinger. Act one had ten of Gimbel's and Charlap's fourteen songs, while four songs (and four reprises from the first act) were sung in act two. Ultimately, Hero fared even worse than Whoop-Up, closing on January 21, after only 7 performances.

In 1963, Gimbel was introduced by music publisher Lou Levy to a group of young Brazilian bossa nova composers, including Antônio Carlos Jobim, Luiz Bonfá and Baden Powell, for whose works he started writing English-language lyrics. Most notably, he created the lyrics for Marcos Valle's "Summer Samba," also known as "So Nice", as well as Jobims "How Insensitive", "The Girl from Ipanema" (turning it into a top hit for Astrud Gilberto) and "Meditation", which has gained the status of a "classic" in the jazz and bossa nova genres. He also provided the lyrics for French composers Michel Legrand (two themes from The Umbrellas of Cherbourg—"Watch What Happens" and the Oscar-nominated "I Will Wait for You"), Eddy Marnay and Emil Stern ("Amazing") and singer-composer Gilbert Bécaud ("You'll See" and other songs). He also provided the lyrics for Belgium jazz harmonica player Toots Thielemans ("Bluesette")."Only Love" sung by Nana Mouskuri - No 2 United Kingdom (Performed in a Command Performance for the Queen Mother).

His long career as award-winning lyricist of film songs

Gimbel received four Golden Globes nominations, the first of which was for the song "Circles in the Water," with music by Francis Lai), written for the American distribution of the 1967 French film Live for Life, while the second honored "Stay" (with composer Ernest Gold), heard in the 1969 film The Secret of Santa Vittoria. The other two were for the songs "Richard's Window," from 1975's The Other Side of the Mountain, and "Ready to Take a Chance Again," used in 1978's Foul Play. Both songs, whose lyrics Gimbel wrote to music that had been composed by Charles Fox, his most frequent collaborator, were also nominated for Oscars.

In 1973 Gimbel experienced another great success when Roberta Flack hit it big with her cover of "Killing Me Softly with His Song". Co-written with Charles Fox, it was originally written for LA bistro singer Lori Lieberman after she shared a poem with them that she had written after seeing Don McLean live in concert. The song won him his second Grammy Award for Song of the Year. The same year his and Fox's "I Got a Name", recorded by Jim Croce, from the 1973 film The Last American Hero, was voted "Best Film Song" by the Young New York Film Critics. In 1979 he had his only Emmy nomination for "Outstanding Music Composition for a Series" for The Paper Chase, which he again shared with Fox. Los Angeles theater work with Fox included a rock/pop version of A Midsummer Night's Dream for the city's Shakespeare Festival, seen at the Ford Amphitheatre, and The Eleventh, which played the Sunset Theater. The year 1980 was a banner year at the Oscars for Norman Gimbel with a win for "Original Music Score" and "Best Original Song" ("It Goes Like It Goes"), written with David Shire for the film Norma Rae.

Continuing his working relationship with Charles Fox, Gimbel wrote lyrics for the theme songs of many TV series, including Laverne & Shirley, Happy Days, Angie, Lifestyles of the Rich and Famous, Wonder Woman, the Emmy-winning theme for The Paper Chase, and the song score for Pufnstuf, the 1970 film version of the 1969–71 Saturday-morning cult children's series H.R. Pufnstuf.

In 1984, Gimbel was inducted into the Songwriters Hall of Fame, and continued to be active in film into 2009. He has written all the songs, including "A World Without Fences" for Disney's 2001 direct-to-video cartoon feature, Lady and the Tramp II: Scamp's Adventure, receiving a nomination for the Video Premiere Award, in addition to having provided song scores for The Phantom Tollbooth (1969), Where's Poppa? (1970), A Troll in Central Park (1994) and The Thief and the Cobbler (a/k/a Arabian Knight) (1995 U.S. version). Over the years, his songs have been used in over ninety films, with some of the most popular titles, such as "The Girl from Ipanema", heard in 1997's Deconstructing Harry, 2002's Catch Me If You Can, 2005's V for Vendetta and Mr. & Mrs. Smith and 2007's The Invasion, and "Sway" heard in 2004's Shall We Dance? and 2046, 2006's Bella, 2007's No Reservations and 2008's Paris. Additional films which used his songs include 1984's Johnny Dangerously, (with composer John Morris), 2006's Invincible ("I Got a Name") and Click ("So Nice") and the 2007 French film Roman de Gare, which featured his English-language lyrics to Gilbert Bécaud's "You'll See." To date, Imdb Filmography credits Norman Gimbel with having over 646 entries of his songs in films and television.

This article uses material from the article Norman Gimbel from the free encyclopedia Wikipedia and it is licensed under the GNU Free Documentation License.