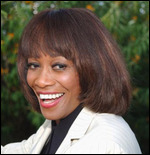 She was born Joan Elizabeth Shaw in Newport News, Virginia, the same home town as Ella Fitzgerald. Jones said, "I loved Sarah Vaughan so much and adored Lena Horne's elegance; I put them together as Salena. It looked good. And I kept Joan in Jones. And that's how Salena Jones was born."[1]

Jones began singing in church, school and began club work at the age of fifteen. After winning a talent contest in New York's Apollo Theater, singing "September Song". She began making demonstration records for Peggy Lee and Lena Horne, acquired her own contract. Her first disc was 1949's "He Knows How to Hucklebuck", with the Paul Williams Orchestraand she toured and sang throughout the 1950s with Louis Armstrong, Arthur Prysock, Cab Calloway, Duke Ellington and Big Maybellesharing bills with fellow Newport News natives the The Five Keys as well as LaVern Baker, before touring in Spain (1965) and Britain (1966), where she appeared for an extended season at Ronnie Scott's Jazz Club. Since then she has appeared at most leading concert halls and clubs in Europe, Africa, South America and Asia, and appeared regularly on radio and TV, with her own series in the United Kingdom. Since visiting Japan for the first time (1978) she appeared there annually, memorably in the Unesco Save The Children Telethon (1988),[2] and on a concert tour with the Royal Philharmonic Orchestra (1992).[3] In 1964, Down Beat jazz critic Leonard Feather chose Salena Jones as one of the female vocalists of the year, alongside Peggy Lee, Ella Fitzgerald and Nancy Wilson.[4]

Salena has also appeared throughout Britain, France, Germany, Switzerland, Spain, the Netherlands, Italy, Denmark, Sweden, Belgium, Turkey, Austria and Bulgaria. She has also made numerous television and radio broadcasts in Britain, and throughout Europe, often supported by the BBC Big Band. Also performed in Australia, Africa, South America, China, Canada, Hong Kong, Indonesia, Thailand and Japan. Since her first visit to Japan in 1978 she has returned at least annually, appearing in concert halls, on television, radio and regularly at the Blue Note Jazz Clubs in Tokyo, Osaka and Fukuoka.

In her career to date Salena has recorded over forty albums, covering nearly five hundred songs, and sold over 500,000 albums worldwide and her album entitled "My Love" recorded in Tokyo won her an award in Japan for outstanding sales.[5] Salena's musical biography includes many distinguished musicians, band leaders and other artists with whom she has performed or recorded. These include such performers as her long-time producer and husband Keith Mansfield, King Curtis, Herman Foster, Arthur Prysock, Tom Jones, The Coasters, Count Basie Orchestra, Adelaide Hall, Art Farmer, Brook Benton, Barney Kessel, Art Themen, Sarah Vaughan, Hank Jones, Maynard Ferguson, Dudley Moore. . . . and many more.

In Rio de Janeiro not long before Antonio Carlos Jobim's death she recorded Salena Sings Jobim With The Jobims (1994) (licensed from Japanese Victor by Vine Gate Music UK), Jobim's hits sung in English, with Paulo Jobim on vocals, flute and guitar, grandson Daniel Cannetti Jobim on piano and the composer himself on two duets, Kenny Burrell on one track: 14 Jobim songs plus Michael Franks's tributes "Antonio's Song (The Rain- bow)" and "Abandoned Garden", and including two duos with Antonio Carlos "Tom" Jobim himself. A beautiful recording and one of her best. In the 1990s Salena made a sequence of six albums all consisting of standards and, incidentally, completed in six weeks, including mixing. Some of these albums, including Dream with Salena, Journey with Salena, Broadway and Hollywood are themed with songs appropriate to the titles.

Early 2000 saw Salena starring at the Lionel Hampton Jazz Festival in Idaho, backed by the Hank Jones Quartet including such current luminaries as Russell Malone, Lewis Nash, and also featuring trumpeter Roy Hargrove, singer Dianne Reeves and Freddie Cole. January 2001 saw Salena return to Israel for eight sell-out shows, and she took her trio to Japan in May for two weeks appearing for Cartier, the exclusive jewellers, at their prestigious trade fairs throughout the country. In May 2006, Salena was thrilled to sing again in China opening the Shanghai International Jazz Festival (opened in 2005 by Diana Krall). Salena opened with Lee Ritenour, and Tower of Power.

She is now based in the United Kingdom.

In Monty Python's The Meaning of Life, Salena is mentioned to have her lyrics written by Schopenhauer.

This article uses material from the article Salena Jones from the free encyclopedia Wikipedia and it is licensed under the GNU Free Documentation License.