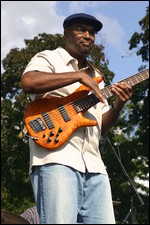 Veasley was born and raised in Philadelphia, Pennsylvania, where he played in R&B groups as a teenager. He worked with Joe Zawinul from 1988 to 1995, and began releasing his own records in 1992. He has also done extensive work as a studio musician. His 2008 release Your Move hit No. 12 on the U.S. Billboard Top Contemporary Jazz Albums chart.[1][2]

Veasley has also worked as a smooth jazz DJ on WJJZ in Philadelphia.

With The Odean Pope Saxophone Choir

This article uses material from the article Gerald Veasley from the free encyclopedia Wikipedia and it is licensed under the GNU Free Documentation License.