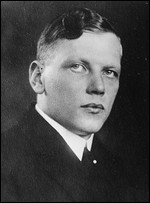 born on 12/3/1888 in Wuppertal, Nordrhein-Westfalen, Germany

Hans Knappertsbusch (12 March 1888 – 25 October 1965) was a German conductor, best known for his performances of the music of Richard Wagner, Anton Bruckner and Richard Strauss.

Knappertsbusch was born in Elberfeld, today's Wuppertal. He studied philosophy at Bonn University and conducting at the Cologne Conservatory with Fritz Steinbach. For a few summers, he assisted Siegfried Wagner and Hans Richter at Bayreuth. He began his career with conducting jobs in Elberfeld (1913-1918), Leipzig (1918-1919) and Dessau (1919-1922). When Bruno Walter left Munich for New York, Knappertsbusch succeeded him as General Music Director of the Bavarian State Orchestra and the Bavarian State Opera, with a lifelong contract. Knappertsbusch later refused to join the Nazi party.

He incurred the wrath of Joseph Goebbels by asking a German diplomat in the Netherlands whether he was a "Muss-Nazi" (someone who was forced to join the Nazi Party for career reasons): as a result his Munich contract was revoked.[1] Hitler himself was involved in the decision to dismiss him.[2] In 1936 Sir Thomas Beecham invited him to Covent Garden to conduct but his permit to leave Germany was withheld.[3] In the late 1930s he went to Vienna to conduct at the Wiener Staatsoper, thus ignoring the Nazis' policy of not allowing German artists to work in Austria. At the same time he became one of the emerging artists of the Salzburg Festival. Knappertsbusch continued to appear in Vienna and Salzburg during the German occupation of Austria.

When World War II ended, Knappertsbusch returned to Munich, but continued to guest conduct in Vienna, as well as to make appearances at the Bayreuth Festival.[4] He was one of the favorite conductors of the Wiener Philharmoniker, leading the orchestra in Vienna, Salzburg and on tour abroad, although generally he rarely toured outside the German-speaking world. He disliked long rehearsals, and was sometimes accused of laziness. He was known for conducting very slowly, emphasizing beauty and dignity over liveliness.[5]

Knappertsbusch died in Munich in 1965. Many of his recordings, including his historic Decca recordings in stereo, have been re-released on CD. Decca went to Bayreuth in 1951 to record only Parsifal, but with the approval of Wieland Wagner and Knappertsbusch himself, Decca also as an experiment recorded a Ring cycle. John Culshaw, the Decca recording producer, was disappointed with the performances of the first three operas in the tetralogy, but was impressed by the Götterdämmerung and edited up a version of it but Decca did not release it.[6] His 1951 and 1962 recordings of Parsifal are highly regarded.[7] Bavarian Radio holds a tape of the 1955 Parsifal, but it has not yet been issued.[8]

This article uses material from the article Hans Knappertsbusch from the free encyclopedia Wikipedia and it is licensed under the GNU Free Documentation License.