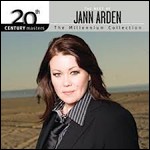 Arden was born and raised near Calgary, in Springbank, Alberta, and she attended Springbank Community High School. She spent most of the 1980s playing her music in bars and busking. Her breakthrough came with her critically acclaimed 1993 debut album Time for Mercy and her first single "I Would Die For You". Her success grew with 1994's Living Under June, which featured her biggest hit to date outside of Canada, "Insensitive", which was released as a single from the soundtrack to the Christian Slater film Bed of Roses (number 12 on the U.S. Billboard Hot 100). Another single from that same album, "Could I Be Your Girl", has also had significant, and consistent airplay on Canadian adult contemporary radio since its release, and in an unusual move for a Jann Arden song, even featured a dance remix version which circulated on pop radio at the time.[1]

Subsequent albums include 1997's Happy?, 2000's Blood Red Cherry (on which Jim Cuddy of Blue Rodeo sang backing vocals), and 2003's Love Is the Only Soldier. She also released a greatest hits album, Greatest Hurts, in 2001, and a live album, Jann Arden Live with the Vancouver Symphony Orchestra (2002). In 2005, she released her eighth album (her sixth album of new material) titled simply Jann Arden.

She also covered Leonard Cohen's "If it be your will..." on the 1995 Cohen tribute album Tower of Song. The song also appears on Greatest Hurts and was a B-side to the "Good Mother" single.

Although Arden's pop-rock songs are known for their sadness and tales of heartache, Arden is paradoxically also known for her gregarious sense of humour. Her personal stories, often involving her close-knit family, have won her great affection among her loyal fan base, and her concerts routinely sell out across Canada. In 1998, respondents to Chart magazine's year-end reader's poll named Arden the Canadian celebrity most deserving of her own talk show. Arden frequently does loving, homespun impersonations of her parents during her shows. As part of her public honesty about her family life, she has revealed that one of her brothers is serving a life sentence in prison, and that her song "Hangin' by a Thread" is dedicated to him.

In December 2006, the first images of a slimmed-down Arden appeared in a photo shoot for Chatelaine magazine, and she revealed that she has recently lost over 50 pounds.

Jann Arden released her ninth album, Uncover Me, on February 6, 2007. This album was her first comprising cover songs exclusively, except for one original piece, "Counterfeit Heart". This was followed by her Uncover Me Tour across Canada during the spring of 2007.[2]

On the weekend of March 24, 2007, Jann Arden was admitted to intensive care for heart related concerns, diagnosed as Takotsubo cardiomyopathy, a condition commonly associated with acute stress and exhaustion.

In 2008, she co-produced the Nashville based Country Crossover group SHeDAISY's latest Album. In September 2009, Arden released her tenth album, Free, and its first single A Million Miles Away. She is also doing a cross-country Canadian tour, which began in November 2009. She toured with proceeds going to the "Raise-a-Reader Concert Series".[4]

Material used in other sources

This article uses material from the article Jann Arden from the free encyclopedia Wikipedia and it is licensed under the GNU Free Documentation License.