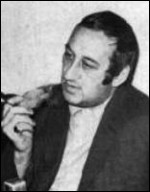 Anthony John "Tony" Crombie (27 August 1925 - 18 October 1999)[1] was an English jazz drummer, pianist, bandleader and composer. He was regarded as one of the finest jazz drummers and bandleaders, and occasional but very capable pianist and vibraphonist, to emerge in Britain, and as an energising influence on the British jazz scene across six decades.[2]

Born in Bishopsgate, London, England, he took up drums in his teens. He began to work regularly in London clubs, and joined the group of vibes player Carlo Krahmer in 1943, before becoming a leader himself for an Irish tour in 1947. In the following year he was part of a trio which accompanied Duke Ellington on the first official post-war tour of Britain by an American jazz artist. In December 1948, he helped start the short-lived Club Eleven in London, which became a crucial focal point for the emerging bebop scene, and worked closely with Ronnie Scott, Johnny Dankworth and others, as well as forming his own septet at the club. He was the drummer in the Victor Feldman Trio in 1954-5, prior to Feldman's move to the US.

He also led his own bands, including an orchestra featuring Dizzy Reece, Les Condon, Joe Temperley, Sammy Walker, Lennie Dawes, Harry South and Ashley Kozak) which made two recordings for Decca Records in 1954, one of which also featured vocalist Annie Ross and a track with Bobby Breen.

In August 1956, Crombie set up a rock and roll band he called The Rockets,[3] which at one point included future Shadows bassist Jet Harris. The group was modelled after Bill Haley's Comets and Freddie Bell & the Bellboys. Tony Crombie and his Rockets released several singles for Decca Records and Columbia Records, including "Teach You To Rock" produced by Norrie Paramor, which is regarded as the first British rock and roll record and which made the Top 30 in the UK Singles Chart in October 1956.[1] He is credited with introducing rock and roll music to Iceland, performing there in May 1957. By 1958 The Rockets had become a jazz group, including Scott and Tubby Hayes.

The following year Crombie started another group, Jazz Inc., featuring pianist Stan Tracey. In 1960, Crombie composed the score for the film The Tell-Tale Heart and established residency at a hotel in Monte Carlo. In May 1960 he toured the UK with Conway Twitty, Freddy Cannon, Johnny Preston, and Wee Willie Harris.[4] On his return to England, he became the house drummer at Ronnie Scott's Jazz Club, where he accompanied visiting American stars like Ella Fitzgerald, Coleman Hawkins, Ben Webster and Jimmy Witherspoon. In September 1965 when Don Byas played at the club his performance was captured on tape, and is available on the CD, Autumn Leaves. Ronnie Scot announced the band saying: "...Tony Crombie is deputising for our regular drummer, Jackie Dougan, who has unfortunately been taken suddenly drunk..." He also performed in Israel and the United States, and began writing for films and television. He also toured with artists like Lena Horne, Carmen McRae, Tony Bennett, and Jack Jones, and played piano on the Annie Ross album Skylark.

Crombie continued to lead his own bands throughout the 1960s and 1970s, while also working with Scott, Tracey, pianist Alan Clare, organist Alan Haven, Mike Carr (as a duo in 1968 and again in 1970-1), and Georgie Fame and the Blue Flames.

Crombie died in Hampstead, North West London in 1999, aged 74 and was cremated at the Golders Green Crematorium.

In 1963, Miles Davis recorded his composition "So Near, So Far" for his Seven Steps to Heaven album, and Joe Henderson would make it the title track for his 1992 tribute album to Davis. Several more of his tunes were taken up by major jazz artists, including "That Tune" and "Restless Girl" by Stephane Grappelli, with whom he often worked, and saxophonist Paul Gonsalves recorded a version of "Deb's Delight".

This article uses material from the article Tony Crombie from the free encyclopedia Wikipedia and it is licensed under the GNU Free Documentation License.