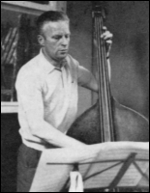 Bush contracted polio as a child and as a result possessed a limp for the rest of his life. He played violin before switching to bass at 16, and was playing professionally by 17 in a variety show called The Rolling Stones and Dawn.

He played with Nat Gonella in the middle of the 1940s, but turned to bebop later in the decade. He was one of the founding members of London's Club Eleven, and played there in a band with Ronnie Scott, Hank Shaw, Tommy Pollard, and Tony Crombie.

He later studied with James Merrett at the Guildhall School of Music, and participated in the European tours of Benny Goodman, Louis Armstrong, Zoot Sims, and Roy Eldridge. He became a member of Jack Parnell's ATV Orchestra in 1957, and recorded with Stephane Grappelli, Anita O'Day, and Eddie Vinson.

He went into semi-retirement in the 1990s, but continued to play up until his death in 2004, notably as part of the Ralph Sharon trio with Jack Parnell.

This article uses material from the article Lennie Bush from the free encyclopedia Wikipedia and it is licensed under the GNU Free Documentation License.