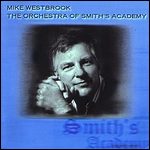 Mike Westbrook grew up in Torquay. After a spell in Accountancy and the National Service[1] (some of it posted to Germany) he went to art school, studying painting, in Plymouth where he also began his first bands in 1958,[2][3] soon joined by such musicians as John Surman, Lou Gare and Keith Rowe.

After moving to London in 1962[4] Westbrook led numerous bands, large and small, and played regularly at the Old Place and the Little Theatre Club. Together with Chris McGregor's Brotherhood of Breath) Westbrook shared the role of House Band at Ronnie Scott's Jazz Club.[5]

He became a key figure in the development of British Jazz, producing several big band records with the newly formed Mike Westbrook Concert Band between 1967 and 1969 for the Deram label, featuring such musicians as Surman, Mike Osborne and Harry Miller. The band varied in size from 10 to 26 musicians.[6] In 1968 his band made their international debut at the Montreux Festival with Malcolm Griffiths, Alan Jackson, Harry Miller, Mike Osborne and John Surman[7]

The 1970s saw a wide range of different projects.

Cosmic Circus, jointly founded with John Fox specialized in large scale, one-off high technology shows involving high-divers, tight-rope, carnival processions and more. It was part of Earthrise Tour in the UK (May 1970 to October 1971).[8][9] This included also singer/vocalist Norma Winstone who performed on several of the band's albums at the time.

Adrian Mitchell drew Mike Westbrook in for his musical "Tyger" on the life of William Blake for the Royal National Theatre. This would become a major influence on Mike Westbrook's work (see paragraph on later work below).

In 1972/73 he also worked in the context of his jazz-rock band Solid Gold Cadillac. The most consequential effect of this was the participation of Phil Minton. His unmistakable voice would feature in many of Westbrook's later projects. A live performance of Solid Gold Cadillac (at the Paris Theatre in London) has been repeatedly broadcast by BBC Radio 6 between 2002 and 2007.[10]

In March 1977 the Mike Westbrook Brass Band, avant-rock group Henry Cow and folk singer Frankie Armstrong merged to form The Orckestra. The ensemble performed in London and several cities in Europe, their last concert being in Bordeaux, France in May 1978.

His work for the theatre began with Adrian Mitchell's Tyger a celebration of William Blake, staged by the Royal National Theatre in 1971. This became a vehicle for his Brass Band of the 70's and 80's and the LP 'The Westbrook Blake - Bright As Fire' followed on in 1980. A revised and expanded version of the work was re-recorded in 1997 and named 'Glad Day'. The Brass Band also recorded 'Mama Chicago' described as a Jazz Cabaret which featured the voices of Phil Minton and Kate Westbrook. The album was released on CD for the first time in 2007.

Further works of note include 'On Duke's Birthday' which was dedicated to the memory of Duke Ellington, which was reissued on CD in the summer of 2007, 'Big Band Rossini' which was featured in the 1992 BBC Proms and Chanson Irresponsable (2002), commissioned by BBC Radio 3, which brings together jazz and classical musicians in the New Westbrook Orchestra. Mike was awarded an OBE in 1988, and in 2004 the University of Plymouth awarded him an Honorary Doctorate of Music.

He continues to produce jazz scores, many for the theatre with his wife, the singer/songwriter Kate Westbrook. He was featured in the 2003 BBC documentary, Jazz Britannia.

Mike's current projects include ART WOLF inspired by the life and work of the Alpine painter Caspar Wolf. In this Kate & Mike Westbrook are joined by saxophonists Pete Whyman & Chris Biscoe. In a more recent project the couple have been joined by four leading Devon musicians to form the Village Band. The acoustic brass band perform many jazz standards and an original piece, the Waxeywork Show, with music written by Mike and text by Kate. The band perform mainly in the Devon and Cornwall area and in 2006 they performed several times at the London Jazz Festival.

This article uses material from the article Mike Westbrook from the free encyclopedia Wikipedia and it is licensed under the GNU Free Documentation License.

Augusta Holmès Molto lento
Update Required To play the media you will need to either update your browser to a recent version or update your Flash plugin.