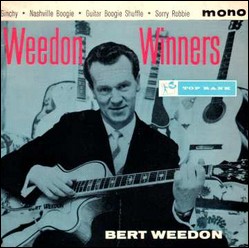 Herbert Maurice William 'Bert' Weedon, OBE (10 May 1920  20 April 2012) was an English guitarist whose style of guitar playing was popular and influential during the 1950s and 1960s. He was the first British guitarist to have a hit record in the UK Singles Chart, in 1959, and his best-selling tutorial guides, Play in a Day, were a major influence on many leading British musicians, such as Eric Clapton, Brian May, Paul McCartney, George Harrison, John Lennon, Dave Davies, Keith Richards, Pete Townshend, Tony Iommi and Jimmy Page.[1][2][3][4] He was awarded an OBE in 2001 for his "services to music".[1]

He was born in Burges Road, East Ham, London. Weedon began learning classical guitar at the age of twelve, and decided to become a professional musician. In his teens during the 1930s, he led groups such as the Blue Cumberland Rhythm Boys, and Bert Weedon and His Harlem Hotshots, before making his first solo appearance at East Ham town hall in 1939.[5] He worked with leading performers including Stephane Grappelli and George Shearing, and performed with various big bands and orchestras, including those of Ted Heath and Mantovani.[3][6]

He joined the BBC Show Band directed by Cyril Stapleton in the 1950s, when he began to be featured as a soloist.[6] He also worked as a session musician on many early British rock and roll and other records for artists such as Adam Faith, Billy Fury and Tommy Steele and worked as an accompanist to visiting American singers such as Frank Sinatra, Judy Garland and Nat King Cole.[4] It is estimated that he performed on over 5,000 BBC radio broadcasts.[3] He was also seen regularly on British television in the 1950s, including some of the most popular children's television programmes.[3] In 1959 he was asked by Top Rank Records to make a record as a solo guitarist.[6] He became the first British guitarist in the UK Singles Chart, with "Guitar Boogie Shuffle" in 1959,[7] and was cited as an influence by many stars, including Eric Clapton, Brian May, Paul McCartney, George Harrison, John Lennon, Pete Townshend, Keith Richards, Sting, Hank Marvin, Robert Smith, Mike Oldfield, Mark Knopfler and Jimmy Page.[1][2][3][4] McCartney commented: "George and I went through the Bert Weedon books and learned D and A together."[3] According to Clapton, "I wouldnt have felt the urge to press on without the tips and encouragement Berts book gives you. Ive never met a player of any consequence that doesnt say the same thing."[2] Brian May stated: "There's not a guitarist in Britain from my generation who doesn't owe him a great debt of gratitude."[1]

As well as his hits and TV appearances at a crucial time in modern music history, his best-known contribution to British guitar style is his tutorial guide Play in a Day, first published in 1957,[5] which many stars claim was a major influence on their learning and playing. It sold over one million copies.[1] He also wrote a follow-up, Play Every Day. His playing style focussed on both rhythm and melody, and was itself influenced by the jazz guitarists of the 1950s, notably Les Paul. Weedon placed a lot of emphasis on control of tone, and wanted to make the guitar the star of his music. The style became best known through the music of The Shadows, especially Hank Marvin. The Bonzo Dog Band mentioned Weedon in their song "We are Normal" on their album, The Doughnut in Granny's Greenhouse (1969). In November 1976, Weedon made number one, for one week, in the UK Albums Chart with 22 Golden Guitar Greats, a compilation album of guitar solos released on the Warwick label.[8][9][10]

Married to Maggie Weedon, he had two sons, Lionel and Geoffrey, eight grandchildren and a great-grandson.[3] A Water Rat, he was highly active in charity work and fundraising, especially for children and the disabled, and was elected King Rat in 1992.[3] He was awarded an OBE in 2001 for his services to music.[1] Weedon died on 20 April 2012, following a long illness.

Neville Marten, editor of Guitar Techniques magazine, commented that Bert Weedon's contribution to the guitar world cannot be overstated: "With 'students' that number Eric Clapton, Brian May, Sting, Pete Townshend, John Lennon, Paul McCartney and countless others, Weedon could well be described as the most genuinely influential guitarist of all time."[1]

Releases on the Top Rank label

This article uses material from the article Bert Weedon from the free encyclopedia Wikipedia and it is licensed under the GNU Free Documentation License.