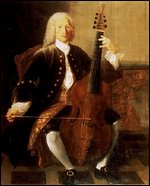 Jean-Baptiste Forqueray (3 April 1699 – August 1782), the son of Antoine Forqueray, was a player of the viol and a composer.

Forqueray was born in Paris. He is most famous today for his 1747 publication of twenty-nine pieces for viol and continuo which he attributed to his father (except for three, for which he himself took credit). In the advertissements he states that he was responsible for the bass line (thus the figures as well) and the viol fingerings. Stylistically, they are very much influenced by Italian music and belong to the generation of Jean-Marie Leclair (1697-1764) and Jean-Pierre Guignon (1702-1774). Modern violists regard these Pieces de viole as the most virtuosic music for the instrument. Only Paolo Pandolfo has attempted to record the complete publication.

Forqueray arranged the same pieces for harpsichord and published these in 1749 (ed. Colin Tilney, Paris, 1970) but remarkably did not transpose any of the music, so the melodies lie relatively low in the range of the harpsichord.

Forqueray's pupils included Louis XV's daughter Princesse Henriette-Anne and the future King Friedrich Wilhelm of Prussia. Forqueray was married twice: to Jeanne Nolson on 29 July 1732 and, after her death, to the harpsichordist Marie-Rose Dubois on 13 March 1741. He died in Paris.

This article uses material from the article Jean-Baptiste Forqueray from the free encyclopedia Wikipedia and it is licensed under the GNU Free Documentation License.

Pjotr Iljitsch Tchaikovsky "Der Nussknacker" Suite op. 71a
Update Required To play the media you will need to either update your browser to a recent version or update your Flash plugin.