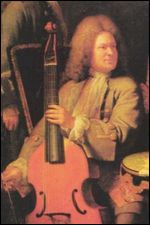 Antoine Forqueray (September 1671 28 June 1745) was a French composer and virtuoso of the viola da gamba.

His son published his works for the viola de gamba in 1747 (two years after his father's death) together with a version for harpsichord.

Marin Marais and Antoine Forqueray were considered by their contemporaries as the two greatest virtuosi of the viola da gamba.

This article is based on a translation of the article on Antoine Forqueray in the French Wikipedia.

This article uses material from the article Antoine Forqueray from the free encyclopedia Wikipedia and it is licensed under the GNU Free Documentation License.