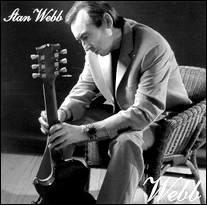 Webb was born in Fulham, South West London. Playing firstly in skiffle bands, Webb, together with bassist Andy Silvester, formed the first version of the blues band, Chicken Shack in 1965. The band played in Hamburg, Germany over the next couple of years, as Webb perfected his playing techniques. They signed to the Blue Horizon record label in 1967, where their label mates were the fledgling Fleetwood Mac. The group was then composed of Webb, Christine Perfect, drummer Dave Bidwell, and bassist Andy Silvester. (Bidwell and Silvester would later become the rhythm section of the British blues ensemble, Savoy Brown. Webb also joined Savoy Brown, recording the album Boogie Brothers). Chicken Shack enjoyed their heyday in the mid to late 1960s, when R&B was a popular music form in England. Their music was traditional in make-up, and the group covered a variety of American blues standards, as well as composing several home-spun tunes. Their repertoire included, arguably, their most played track "I'd Rather Go Blind". This song was originally recorded by Etta James, written by Ellington Jordan and Billy Foster, and became a modern day blues classic. To this day it is still a major part of Stan's repertoire and goes well beyond Chistine's rendition.

Chicken Shack are probably most remembered for including Perfect on keyboards and vocals in their line-up. She rose to far greater fame when she later joined Fleetwood Mac becoming Christine McVie after her marriage to the band's bassist, John McVie.

Chicken Shack's line-up has evolved and changed considerably over the years with Webb being the only constant factor. In 2001, Webb released his first solo album for over eight years when Webb appeared on the Indigo Records label.

This article uses material from the article Stan Webb from the free encyclopedia Wikipedia and it is licensed under the GNU Free Documentation License.

Eugène Walckiers Streichquintett Nr.2 in c-Moll
Update Required To play the media you will need to either update your browser to a recent version or update your Flash plugin.