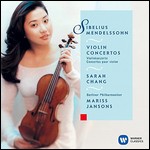 Sarah Chang (Korean: 장영주) (born Young Joo Chang, on December 10, 1980) is an American classical violinist. Recognized as a child prodigy, she first played as a soloist with the New York Philharmonic and the Philadelphia Orchestra in 1989. She enrolled at Juilliard School to study music, graduated in 1999, and continued university studies. Especially during the 1990s and 2000s, Chang had major roles as a soloist with many of the world's major orchestras.

Chang was born in Philadelphia, Pennsylvania, and raised in Voorhees Township, New Jersey.[2] She is the daughter of Myoung-Jun, a composer, and Min-Soo Chang, who was a violinist and music teacher.[3] Chang's parents moved to the United States from South Korea in 1979 for her father's advanced music degree at Temple University. Her mother took composition classes at the University of Pennsylvania. Chang has said that although she "never actually lived in Korea... I do still feel very strongly it's where my roots are."[4] Her younger brother Michael (born 1987) has a degree from Princeton University.[5][6]

In 1986, when Chang was 5 years old, she auditioned for and was accepted to the Juilliard School by performing the Bruch Violin Concerto No. 1 in G minor.[7] Chang spent her weekends attending music classes at Juilliard and shopping in New York City with her parents.[8][9] In 1989, she began working with Dorothy DeLay at her studio in New York[10] where her father had received his musical lessons, and at the Aspen Music Festival and School.[11] A former student and assistant to DeLay, Hyo Kang, also provided training to Chang.[12][13] Following her 1999 high school graduation in New Jersey, she returned to Juilliard for university and studied with DeLay.[14]

Chang learned from a family environment to naturally speak Korean. She is also fluent in German.[15][16]

Due to her musical accomplishments, Chang is among a very small number of professional figures recognized as a child prodigy.[17][18]

Her mother trained her to play one-finger melodies on the piano at age 3. For her fourth birthday, she was given a 1/16-sized violin. At age 8, she auditioned alongside Zubin Mehta and Riccardo Muti, who worked with the New York Philharmonic and the Philadelphia Orchestra. Both granted her immediate engagements.[19][20][21]

In 1991, when Chang was 10 years old, she recorded her first album, Debut;[22] it was released by EMI Classics on August 18, 1992 and quickly reached the Billboard chart of classical best-sellers.[23] Chang quickly rose to fame and became known on an international scale, performing up to 150 concerts a year. At the age of 17, she asked for a three-month break; this opportunity did not come until she turned 20 years old. In 2006, Newsweek ranked her as one of the Top Eight Achieving Females in the United States. In the interview accompanying the feature, she commented: "I think having a career at such an early age kept me focused. We schedule at least two to three years in advance in the classical industry. I felt so grounded and so grateful to already know what it was that I wanted to do with my life."[24]

In 2002, she performed in Pyongyang, North Korea. Chang commented: "The concert was full of government officials. Every single last seat. It was invitation only, but it was an unbelievable experience. Frightening and exhilarating at the same time. And I just thought about how lucky I am. I am so fortunate to be a musician, and at that moment, I genuinely felt that music is the one and only universal language."[24][25]

Chang took part in watchmaker Movado's global advertising campaign "The Art of Time" with Pete Sampras and composer Wynton Marsalis. For the 2004 Olympics, she was selected to carry the Olympic Torch in New York.[26] In 2005, Yale University dedicated a chair in Sprague Hall in Chang's name.[26] Following this, Chang toured for a year with the Berlin Philharmonic and the Royal Concertgebouw Orchestra in a Sextet programme of summer festivals leading to a concert at the Berlin Philharmonie.[27][28]

Chang played a recital at Carnegie Hall on April 7 2007, accompanied by the British pianist Ashley Wass.[29] She has continued to perform with the Los Angeles Philharmonic and Esa-Pekka Salonen and make appearances with the former at both the Hollywood Bowl and Walt Disney Concert Hall throughout 2008.[30] On March 27 and 28 2008 she played for San Antonio, Texas audiences at the Majestic Theater, a performance which was preceded by an appearance (to meet and inspire young as well as seasoned musicians at no charge) at Antonio Strad Violin in the same city.[31] From May 2009 to June 2010, she held recital tours across Europe, North America and Asia with pianist Andrew von Oeyen; a July 2010 recording of the two was eventually released.[32] In the February 12, 2010 program, she held her recital at the Barbican Hall in London.[33] Chang made an appearance at the University of Southern California in March 2010, where she played Max Bruch's Violin Concerto No. 1 in G minor, Op. 26. She performed at the Hollywood Bowl in August 2010.[34][35]

Chang plays the 1717 Guarneri del Gesù violin, which she received through the late Isaac Stern,[18] and uses a variety of bows: she has said that she prefers a Pajeot for Mozart and Bach; a Sartory for the Tchaikovsky and Sibelius concerti; and two Dominique Peccattes for other music.[18]

As a chamber musician, Chang has collaborated with Pinchas Zukerman, Wolfgang Sawallisch, Vladimir Ashkenazy, Yefim Bronfman, Martha Argerich, Leif Ove Andsnes, Stephen Kovacevich, Yo-Yo Ma, Lynn Harrell, Lars Vogt, and the late Isaac Stern. She has made several chamber recordings with current and former members of the Berlin Philharmonic, including the Sextet and Piano Quintet of Dvořák and the Souvenir de Florence of Tchaikovsky.

In January 2011, Sarah Chang was interviewed by Evan Solomon of Power & Politics (CBC) where it was revealed that she had been appointed by President Obama to the Presidential Commission on Russian Relations, and also was taking on a new role as State Department Special Cultural Envoy.[7] Chang has already been promoting and supporting childhood musical education for many years. She has also been a cultural ambassador for the U.S.; for instance, she was invited to play in North Korea's capital, Pyongyang, with a South Korean orchestra in 2002.[25]

Chang has received a number of awards, including:

This article uses material from the article Sarah Chang from the free encyclopedia Wikipedia and it is licensed under the GNU Free Documentation License.

Max Bruch Romanze für Bratsche und Orchester op.85
Update Required To play the media you will need to either update your browser to a recent version or update your Flash plugin.