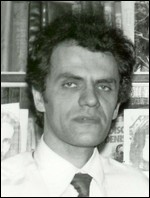 He studied composition first with Grigory Frid at a regional music college, and later with Vladimir Ferè at the Moscow Conservatory, graduating in 1969. Between 1969 and 1974, Vustin worked as a music editor at USSR Radio. From 1974 he worked as an editor at the Kompozitor publishing house.

Vustin married Marina Yelyanova, a music editor at the Moscow Radio. Their son Yuri is a singer at "The Ensemble Madrigal" and also a musical improviser. His improvisation were used in various performances and recordings of his father's works.

Vustin has composed since 1963: however, he regards only those works written since 1972 as valid. His musical language is distinctive by the remarkable organization of its musical texture. Vustin uses the twelve-tone technique, but in his own original way.

His first notable compositions were written in the midst of the 70s: the eight-minute long The Word (scored for ensemble of woodwinds, brass and percussion (1975)) was dedicated to Grigori Frid; and the three-minute long In Memory of Boris Klyuzner, for baritone and string quartet (1977) was set to the autobiographical text by Yuri Olesha. Another striking piece, Blessed are the Poor in Spirit for boy-soprano (or counter-tenor) accompanied by a chamber ensemble was composed in 1988 to the text from Matthew 5:3-8.

His opera The Devil in Love, to the Russian libretto by Vladimir Khachaturov after the novel The Devil in Love by Jacques Cazotte, the result of 15 years of labour, (1975-1989)is probably one of the most important of his works. Despite this, it was not staged yet its musical material nourished the dozens of compositions written in around the same period.

The most of recording of his music are available and can be heard, at the following link: Classical Archives

This article uses material from the article Alexander Vustin from the free encyclopedia Wikipedia and it is licensed under the GNU Free Documentation License.