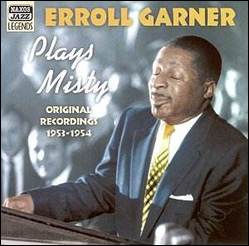 Erroll Louis Garner (June 15, 1923 – January 2, 1977; some sources say b. 1921)[5][6] was an American jazz pianist and composer known for his swing playing and ballads. His best-known composition, the ballad "Misty", has become a jazz standard. Scott Yanow of Allmusic calls him "one of the most distinctive of all pianists" and a "brilliant virtuoso."[7] He received a star on the Hollywood Walk of Fame at 6363 Hollywood Blvd.

Born with his twin brother Ernest in Pittsburgh, Pennsylvania, to an African-American family on June 15, 1923, Erroll began playing piano at the age of three. His elder siblings were taught piano by Miss Bowman. From an early age, Erroll would sit down and play anything she had demonstrated, just like Miss Bowman, his eldest sister Martha said.[8] He attended George Westinghouse High School, as did fellow pianists Billy Strayhorn and Ahmad Jamal. Garner was self-taught and remained an "ear player" all his life, never learning to read music.[2] At age seven, he began appearing on the radio station KDKA in Pittsburgh with a group called the Candy Kids. By age 11, he was playing on the Allegheny riverboats. At 14 in 1937, he joined local saxophonist Leroy Brown.

He played locally in the shadow of his older pianist brother Linton Garner and moved to New York City in 1944. He briefly worked with the bassist Slam Stewart, and though not a bebop musician per se, in 1947 played with Charlie Parker on the "Cool Blues" session. Although his admission to the Pittsburgh music union was initially refused because of his inability to read music, it relented in 1956 and made him an honorary member.[2] Garner is credited with a superb memory of music. After attending a concert by the Russian classical pianist Emil Gilels, Garner returned to his apartment and was able to play a large portion of the performed music by recall.[2]

Short in stature (5 ft 2 in), Garner performed sitting on multiple telephone directories.[2][9] He was also known for his vocalizations while playing, which can be heard on many of his recordings. He helped to bridge the gap for jazz musicians between nightclubs and the concert hall.

Garner made many tours both at home and abroad, and regularly recorded. He was, reportedly, The Tonight Show host Johnny Carson's favorite jazz musician, appearing on Carson's show many times over the years.

Garner died of cardiac arrest related to emphysema on January 2, 1977.[2] He is buried in Pittsburgh's Homewood Cemetery.

In 2016, Downtown Music Publishing entered an exclusive worldwide administration agreement with Octave Music Publishing Corp. The deal covers all of Garner’s works including “Misty”, as well as Garner’s extensive archive of master recordings, many of which remain unreleased.[10]

Called "one of the most distinctive of all pianists" by jazz writer Scott Yanow, Garner showed that a "creative jazz musician can be very popular without watering down his music" or changing his personal style.[7] He has been described as a "brilliant virtuoso who sounded unlike anyone else", using an "orchestral approach straight from the swing era but ... open to the innovations of bop."[7] His distinctive style could swing like no other, but some of his best recordings are ballads, such as his best-known composition, "Misty", which rapidly became a jazz standard – and was featured in Clint Eastwood's film Play Misty for Me (1971).

Garner may have been inspired by the example of Earl Hines, a fellow Pittsburgh resident but 18 years his senior, and there were resemblances in their elastic approach to timing and use of right-hand octaves. Garner's early recordings also display the influence of the stride piano style of James P. Johnson and Fats Waller. He developed a signature style that involved his right hand playing behind the beat while his left strummed a steady rhythm and punctuation, creating insouciance and tension. The independence of his hands also was evidenced by his masterful use of three-against-four and more complicated cross-rhythms between the hands. Garner would also improvise whimsical introductions to pieces that left listeners in suspense as to what the tune would be. His melodic improvisations generally stayed close to the theme while employing novel chord voicings.

Garner's first recordings were made in late 1944 at the apartment of Timme Rosenkrantz; these were subsequently issued as the five-volume Overture to Dawn series on Blue Note Records. His recording career advanced in the late 1940s when several sides such as "Fine and Dandy", "Skylark" and "Summertime" were cut. His 1955 live album Concert by the Sea was a best-selling jazz album in its day and features Eddie Calhoun on bass and Denzil Best on drums. This recording of a performance at the Sunset Center, a former school in Carmel-by-the-Sea, California, was made using relatively primitive sound equipment, but for George Avakian the decision to release the recording was easy.

One World Concert was recorded at the 1962 Seattle World Fair (and in 1959 stretching out in the studios) and features Eddie Calhoun on bass and Kelly Martin on drums.[11] Other works include 1951's Long Ago and Far Away, 1953's Erroll Garner at the Piano with Wyatt Ruther and Fats Heard,[12] 1957's The Most Happy Piano, 1970's Feeling Is Believing and 1974's Magician, which see Garner perform a number of classic standards. Often the trio was expanded to add Latin percussion, usually a conga.

In 1964, Garner appeared in the UK on the music series Jazz 625 broadcast on the BBC's new second channel. The programme was hosted by Steve Race, who introduced Garner's trio with Eddie Calhoun on bass and Kelly Martin on drums.[13]

Because Garner could not write down his musical ideas, he used to record them on tape, to be later transcribed by others.[14]

The Erroll Garner Club was founded in 1982 in Aberlady, Scotland. On September 26, 1992 Garnerphiles from England, Scotland, Germany and the USA met in London for a unique and historic get-together. The guests of honour were Eddie Calhoun (bassist) and Kelly Martin (drummer), Erroll's rhythm section from the mid 1950s to the mid 1960s. On June 15, 1996 many of the UK's keenest Garnerphiles converged in Cheltenham for an afternoon of food, music and fun on what would have been Erroll's 75th birthday. That evening they were saddened to hear of the death of another jazz legend: Ella Fitzgerald.[15]

In 2012 a film on Garner was released by Atticus Brady called No One Can Hear You Read, which Garner used to say when asked why he had never learned to read music. Footage of the piano prodigy playing and speaking was intercut with interviews: with admirers (including Woody Allen, Steve Allen and his fellow musicians Ahmad Jamal, also from Pittsburgh and Ernest McCarty, his bassist for many years); with family members, including his big sister Ruth Garner Moore and daughter Kim Garner; with George Avakian, the producer of Concert by the Sea; and with Jim Doran his biographer. The film attempts to address Garner's fall from prominence after his death, reminding viewers how popular and original he was in his day as well as why he is considered in many quarters a legend, one of the true greats of jazz.

On September 18, 2015, Concert by the Sea was re-released by Sony Legacy in an expanded, three-CD edition that adds 11 previously unreleased tracks.

This article uses material from the article Erroll Garner from the free encyclopedia Wikipedia and it is licensed under the GNU Free Documentation License.

Charles Gounod Sinfonie Nr. 2 Es-Dur
Update Required To play the media you will need to either update your browser to a recent version or update your Flash plugin.