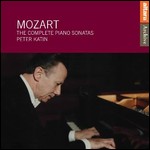 He was educated at private schools in Balham, Caterham, and East Grinstead and the Henry Thornton School (then known as the South West London Emergency Secondary School) in Clapham,[1] and was admitted to the Royal Academy of Music at the age of 12, four years younger than the official entry age, where he studied under Harold Craxton. Katin made his debut at the Wigmore Hall on 13 December 1948 where the programme included works by Scarlatti, Mozart, Beethoven, Rachmaninoff, Scriabin and Chopin. He went on to give concerts in England, Europe, Africa, the USA, and Japan.

In 1952, Katin debuted at The Proms and in 1953 was acclaimed for his performance there of Rachmaninoff's Piano Concerto No. 3 in D minor. In 1958, Katin became the first British pianist to make a post-war solo tour of the Soviet Union. In 1961, the composer Bryan Kelly wrote Tango especially for Katin.

Katin specialises in Romantic music, particularly Frédéric Chopin, and Impressionist music. He is acclaimed for his technical command of the piano. He also directed concertos by Wolfgang Amadeus Mozart and Ludwig van Beethoven from the keyboard.

Katin has written many articles on piano technique and interpretation. He lectured at the Royal Academy of Music 1956-1959, University of Western Ontario 1978-1984, and in 1992 was appointed to the Royal College of Music. He has also lectured at Thames Valley University.

He lives in Bexhill-on-Sea.

This unique and critically acclaimed recording is of the last time Katin played this work in public; he vowed never to play it again after this performance[2]

This article uses material from the article Peter Katin from the free encyclopedia Wikipedia and it is licensed under the GNU Free Documentation License.