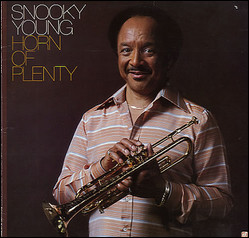 Eugene Edward "Snooky" Young (February 3, 1919 – May 11, 2011)[2] was an American jazz trumpeter. He was known for his mastery of the plunger mute, with which he was able to create a wide range of sounds.

Young was lead trumpeter of the Jimmie Lunceford band from 1939 to 1942. He played with Count Basie (three stints totalling eight years), Gerald Wilson and Lionel Hampton, among others, and was an original member of the Thad Jones/Mel Lewis Big Band.[3]

His longest engagement was with NBC, where, as a studio trumpeter, he joined The Tonight Show Band in 1967 and stayed with them until 1992, when the band was replaced by a new, smaller group.

He was also part of the touring ensemble that traveled with Doc Severinsen, performing live concert dates, corporate events, and headling shows in the main rooms of Las Vegas. The one nighters usually occurred on Fridays, Saturdays, or Sundays, as Severinsen was committed to The Tonight Show on weeknights.

For the Las Vegas gigs, the nucleus of Severinsen's touring band (Young, conductor Steve Thoma, and drummer Paul Line) would commute to Vegas nightly, leaving Van Nuys airport around 6:00pm via Lear Jet, arriving in Las Vegas by 7:00. A limousine would transport the musicians directly backstage, where they would dress and prepare for an 8:00 pm and midnight show. Then back to the airport for the ride back to Los Angeles, where Severinsen and Young had their NBC gig, and Steve Thomas and Paul Line were undertaking studio sessions daily.

Young performed nightly with Severinsen, and he was featured prominently for several solos, as well as a trumpet version of "Dueling Banjos". He continued to perform in Los Angeles, appearing on the classic 1976 Coconut Grove recording Bobby Bland and B.B. King Together Again...Live and again on King's 2008 album One Kind Favor.

He was one of horn players that accompanied rock group The Band on their 1972 live album Rock of Ages.[4]

Throughout the years, Snooky recorded and performed with Gerald Wilson (a friend since the Lunceford days) and his Orchestra. Until 2010 he was still playing and recording with the Clayton-Hamilton Jazz Orchestra.

This article uses material from the article Snooky Young from the free encyclopedia Wikipedia and it is licensed under the GNU Free Documentation License.

Antoine Mahaut Sinfonia Nr. 5 D-Dur
Update Required To play the media you will need to either update your browser to a recent version or update your Flash plugin.