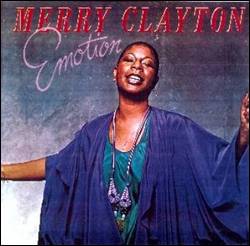 Merry Clayton (born December 25, 1948) is an American soul and gospel singer (both solo and back-up), and an actress. She has provided a number of back-up vocal tracks to songs recorded by major performing artists during the 1960s, most notably with her duet with Mick Jagger on The Rolling Stones song "Gimme Shelter".[1] Merry is featured in 20 Feet from Stardom, the Oscar-winning documentary about background singers and their contributions to the music industry. In 2013, she released The Best of Merry Clayton, a compilation of her best and most favorite songs.

Born in Gert Town, New Orleans, Louisiana, Clayton began her recording career in 1962 at the age of fourteen, singing "Who Can I Count On? (When I Can't Count on You)" as a duet with Bobby Darin on his album "You're the Reason I'm Living". A year later, she recorded the first version of "The Shoop Shoop Song (It's in His Kiss)", although it was Betty Everett's version of the same year that reached the top 10 in the Billboard Hot 100.[2] Her early career included performances with artists including Ray Charles (as one of The Raelettes), Pearl Bailey, Phil Ochs, and Burt Bacharach. (She is often credited as having recorded with Elvis Presley but her name does not appear in Elvis sessionographies.)[3] In 1971 she co-wrote the song "Sho' Nuff", which is about her mother.[4] She contributed vocals to Donald Cammell and Nicolas Roeg's 1968 film Performance.

She is best known for her 1969 performance in a duet with Mick Jagger on the Rolling Stones song "Gimme Shelter". (The Stones had intended to have Bonnie Bramlett sing, but Bramlett was not available, possibly because of illness.)[5] Clayton also sang backing vocals on Lynyrd Skynyrd's "Sweet Home Alabama".[6] Early in her career, Clayton sang backup vocals for Tom Jones, Joe Cocker ("Feelin' Alright"), Linda Ronstadt and Carole King. She also originated the role of the Acid Queen in the original 1972 London production of The Who's Tommy. In 1973, she was featured prominently on Ringo Starr's "Oh My My", a Billboard Top 10 single in early 1974. More recently, Clayton has provided background vocals for Sparta's latest album Threes on the songs "Atlas" and "Translation". As an actress, she co-starred with Ally Sheedy in the 1987 film Maid to Order, and played Verna Dee Jordan in the final season of Cagney & Lacey.

In 1970, Clayton recorded her own version of "Gimme Shelter," and it became the title track of her debut solo album,[7] released that year. Her version would be the first of five singles under her name to crack the Billboard Hot 100, reaching #73. In the mid 1970s, she sang on The BlackByrds' R&B hit "Rock Creek Park". She continued to release solo albums throughout the next decade, notching several minor R&B singles. Clayton performs a live version of what has been deemed the Black National Anthem, "Lift Every Voice and Sing", on the soundtrack for the 1970 Robert Altman film Brewster McCloud.

Clayton sang "You're Always There When I Need You," the main title for the 1980 film The Nude Bomb, which is the first Get Smart movie and stars Don Adams. She also sang the song "Yes" that was in the 1987 film Dirty Dancing, and featured on the soundtrack album. This tune became her biggest hit to date to crack the Billboard Hot 100, peaking at #45 in 1988. She also recorded backing vocals for and sang the "man with the golden gun" bridge on Tori Amos's 1994 hit, "Cornflake Girl".

Clayton was married to jazz artist Curtis Amy from 1970 until his death in 2002.[8] Clayton's brother is the Little Feat percussionist Sam Clayton.[9]

She had a miscarriage upon returning home from recording "Gimme Shelter"; some hypothesize this was due to the strain associated with reaching such high notes while singing, although the validity of such claims is highly disputable.[10]

This article uses material from the article Merry Clayton from the free encyclopedia Wikipedia and it is licensed under the GNU Free Documentation License.