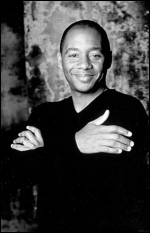 Branford Marsalis (born August 26, 1960) is an American saxophonist, composer and bandleader. He has been cited as "arguably the most respected living U.S. jazz instrumentalist".[1] While primarily known for his work in jazz as the leader of the Branford Marsalis Quartet, he also performs frequently as a soloist with classical ensembles and has led the group Buckshot LeFonque.

In mid-1980, while still a Berklee College of Music student, Marsalis toured Europe playing alto and baritone saxophone in a large ensemble led by drummer Art Blakey. Other big band experiences with Lionel Hampton and Clark Terry followed over the next year, and by the end of 1981 Marsalis, on alto saxophone, had joined his brother Wynton in Blakey's Jazz Messengers. Other performances with his brother, including a 1981 Japanese tour with Herbie Hancock, led to the formation of his brother Wynton's first quintet, where Marsalis shifted his emphasis to soprano and tenor saxophones. He continued to work with Wynton until 1985, a period that also saw the release of his own first recording, Scenes in the City, as well as guest appearances with other artists including Miles Davis and Dizzy Gillespie

In 1985, he joined Sting, singer and bassist of rock band the Police, on his first solo project, The Dream of the Blue Turtles, alongside jazz and session musicians Omar Hakim on drums, Darryl Jones on the bass and Kenny Kirkland on keyboards. He became a regular in Sting's line-up both in the studio and live up until the release of Brand New Day in 1999.

In 1994, Marsalis appeared on the Red Hot Organization's compilation CD, Stolen Moments: Red Hot + Cool.[4] The album, meant to raise awareness of the AIDS epidemic in African American society, was named Album of the Year by Time.

In 1988, Marsalis co-starred in the Spike Lee film School Daze, also rendering several horn-blowing interludes for the music in the film. His witty comments have pegged him to many memorable one-liners in the film.

From 1992 to 1995, Branford was the leader of the Tonight Show Band on The Tonight Show with Jay Leno. Initially, he turned down the offer, but later reconsidered and accepted the position. He was succeeded as bandleader by guitarist Kevin Eubanks.

Between 1990 and 1994, Branford played with the Grateful Dead several times.

Marsalis released a second Buckshot LeFonque recording in 1997. His primary interest since 1996 has been on his quartet, classical performance, and education.

With original member Jeff "Tain" Watts on drums, bassist Eric Revis replaced Hurst in 1997, while pianist Joey Calderazzo became a member after Kirkland's death the following year. The Branford Marsalis Quartet has toured and recorded extensively, receiving a Grammy in 2001 for the album Contemporary Jazz. For two decades Marsalis was associated with Columbia, where he served as creative consultant and producer for jazz recordings between 1997 and 2001, including signing saxophonist David S. Ware for two albums.[5]

Marsalis placed greater emphasis on classical music since the 2001 release of his album Creation. Performances with symphony orchestras and chamber ensembles worldwide have become a significant part of his itinerary. In October and November 2008, Marsalis toured the U.S. with Philarmonia Brasileira, performing music by Brazilian composer Heitor Villa-Lobos, arranged for solo saxophone and orchestra. This project commemorated the 50th Anniversary of the composer's death.

In 2002, Marsalis founded his own label, Marsalis Music. Its catalogue includes Claudia Acuña, Harry Connick Jr., Doug Wamble, Miguel Zenón, in addition to albums by members of the Marsalis family.[6]

Marsalis has also become involved in college education, with appointments at Michigan State (1996–2000), San Francisco State (2000–2002), and North Carolina Central University (2005–present). After Hurricane Katrina in 2005, Marsalis and Harry Connick, Jr., working with the local Habitat for Humanity, created Musicians Village in New Orleans, with the Ellis Marsalis Center for Music the centerpiece. In 2012, Marsalis and Connick received the S. Roger Horchow Award for Greatest Public Service by a Private Citizen, an award given out annually by Jefferson Awards.[7]

In September 2006, Branford Marsalis was awarded an Honorary Doctorate of Music from Berklee College of Music. During his acceptance ceremony, he was honored with a tribute performance featuring music from throughout his career.[8]

Under the direction of conductor Gil Jardim, Branford Marsalis and members of the Philharmonia Brasileira toured the United States in the fall of 2008, performing works by Brazilian composer Heitor Villa-Lobos, arranged for solo saxophone and orchestra. This project commemorated the 50th Anniversary of the revered Brazilian composer s death.

Branford Marsalis and the members of his quartet joined the North Carolina Symphony for American Spectrum, released in February 2009 by Sweden's BIS Records. The album showcases Marsalis and the orchestra performing a range of American music by Michael Daugherty, John Williams, Ned Rorem and Christopher Rouse, while being conducted by Grant Llewellyn.

On July 14, 2010, Marsalis made his debut with the New York Philharmonic on Central Park's Great Lawn. Led by conductor Andrey Boreyko, Marsalis and the New York Philharmonic performed Glazunov's "Concerto for Alto Saxophone" and Schuloff's "Hot-Sonate for Alto Saxophone and Orchestra." Boreyko, Marsalis and the Philharmonic performed the same program again in Vail, CO later that month and four more times at Avery Fisher Hall in New York, NY the following February.

Marsalis, with his father and brothers, were group recipients of the 2011 NEA Jazz Masters Award.[9]

In June 2011, after working together for over 10 years in a band setting, Branford Marsalis and Joey Calderazzo released their first duo album titled Songs of Mirth and Melancholy, on Branford's label, Marsalis Music. Their world premiere performance was on June 29, 2011 in Koerner Hall at the 2011 TD Toronto Jazz Festival.

In 2012, Branford Marsalis released Four MFs Playin' Tunes on deluxe 180-gram high definition vinyl, prior to Record Store Day 2012 on April 21, 2012. This is the first recording of the Branford Marsalis Quartet with drummer Justin Faulkner, who joined the band in 2009 and was the first vinyl release from Marsalis Music. The CD and digital release of Four MFs Playin' Tunes followed on August 7, 2012. Vinyl purchases came with a download card that enabled purchasers to receive a free digital copy when it was released. The album was named Apple iTunes Best of 2012 Instrumental Jazz Album of the Year.

In May 2012, Branford Marsalis received an honorary Doctor of Music degree from the University of North Carolina at Chapel Hill.[10]

In June 2012, Marsalis, alongside friend and fellow New Orleans native Harry Connick, Jr., was honored by the Jefferson Awards for Public Service for his work in the Musicians' Village of New Orleans.

Marsalis performed The Star-Spangled Banner on Wednesday, September 5, 2012 at the Democratic National Convention in Charlotte.

On March 26, 2013, Branford Marsalis received the degree of Doctor of Arts Leadership, honoris causa from Saint Mary's University of Minnesota.

This article uses material from the article Branford Marsalis from the free encyclopedia Wikipedia and it is licensed under the GNU Free Documentation License.