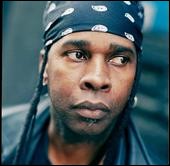 Vernon Alphonsus Reid (born 22 August 1958) is an English-born American guitarist, songwriter, composer, bandleader, and photographer. Best known as the founder and primary songwriter of the rock band Living Colour, Reid was named No. 66 on Rolling Stone magazine's 2004 list of the 100 Greatest Guitarists of All Time,[1] although he was not included on the revised 2011 list.[2]

Critic Steve Huey writes, "[Reid's] rampant eclecticism encompasses everything from heavy metal and punk to funk, R&B and avant-garde jazz, and his anarchic, lightning-fast solos have become something of a hallmark as well."[3]

Reid was born in London, England, to Caribbean parents, but he was raised in New York City. He attended the prestigious math-science-engineering Brooklyn Technical High School, then New York University.

He first came to prominence in the 1980s in the band of drummer Ronald Shannon Jackson. 1984's Smash & Scatteration was a duo record with guitarist Bill Frisell. In 1985, Reid co-founded the Black Rock Coalition with journalist Greg Tate and producer Konda Mason.

Reid is best known for leading Living Colour. Early versions of the group formed in New York City in 1983, but the personnel solidified in 1985–86, and Reid led the group for about another decade.

Among the highlights: a double Platinum-selling debut album Vivid, released in 1988; its gold-certified successor, Time's Up, released 1990; two consecutive Grammy Awards in the category of Best Hard Rock Performance; opening for the Rolling Stones' 1989 "Steel Wheels" tour; and appearing on the first Lollapalooza tour in the summer of 1991. Living Colour broke up in 1995 but eventually reformed in 2000. Since then, they have released three more albums: Collideøscope in October 2003 on Sanctuary Records, The Chair in the Doorway in September 2009, and Shade in September 2017 on Megaforce Records.

In addition to his work with Living Colour, Reid has been engaged in a number of other projects. He released Mistaken Identity, his first solo album, in 1996 and has collaborated with the choreographers Bill T. Jones on Still/Here and Donald Byrd on Jazztrain. He performed "Party 'Til The End of Time" at the Brooklyn Academy of Music (BAM) with The Roots, an end of the 2000 millennium tribute featuring the music of Prince's album 1999. He also composed and performed "Bring Your Beats" a children's program for BAM.

Reid has also undertaken significant work as a record producer, including two Grammy-nominated albums: Papa (1999) by the African vocalist Salif Keita and Memphis Blood: The Sun Sessions (2001) by guitarist James Blood Ulmer. Ulmer's subsequent albums, No Escape from the Blues: The Electric Lady Sessions (2003), Birthright (2005), and Bad Blood in the City: The Piety Street Sessions (2007), were also produced by Reid.

Reid and DJ Logic, calling themselves "Yohimbe Brothers", released an album in September 2002 entitled Front End Lifter. The Yohimbe Brothers have been touring on and off since the release of the album. Reid was also the music supervisor for the film Mr. 3000, starring Bernie Mac and directed by Charles Stone III; the film was released in September 2004. Vernon's album with Masque (Leon Gruenbaum – keyboards & samchillian tip tip tip cheeepeeeee, Hank Schroy – bass and Marlon Browden – drums), an instrumental album entitled Known Unknown, was released in April 2004, and on 18 April 2006 Vernon Reid and Masque released Other True Self, both on Favored Nations records, owned by another guitarist, Steve Vai.

Reid played at America's Millennium Gala, New Year's Eve 31 December 1999, and 1 January 2000, at the Lincoln Memorial, performing "Fortunate Son" with John Fogerty. Among those in the audience were President Bill Clinton and First Lady Hillary Clinton.

In March 2007, Reid played with Jamaaladeen Tacuma, and G. Calvin Weston at Tonic in NYC, and Tritone in Philadelphia, which led them to record as Free Form Funky Freqs with the recording entitled Urban Mythology Volume 1. European Tour in November and a soon-to-be-released CD.

During the early years of Living Colour, Reid used a multi-colored ESP Mirage with EMG pickups, and he was an endorser of the A/DA MP-1 preamp. In recent years, Reid has used custom Hamer guitars, but he also has a relationship with Parker Guitars and has a signature guitar called the DF824VR, which is based on Parker's Dragonfly model. it has HSS EMG-X pickups, a Floyd Rose vibrato (It is the first Parker guitar to have one) a 5-way mag pickup switching system and a Roland MIDI pickup. Since 2016, he has switched to PRS and is working on a signature model with them.

With Ronald Shannon Jackson and the Decoding Society

With Mitch Winston and the Band of Natural Selection

This article uses material from the article Vernon Reid from the free encyclopedia Wikipedia and it is licensed under the GNU Free Documentation License.

Wolfgang Amadeus Mozart 2.Satz, Romanze aus dem Hornkonzert Es-Dur KV 447
Update Required To play the media you will need to either update your browser to a recent version or update your Flash plugin.