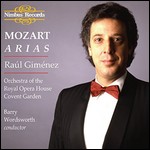 Raúl Giménez (born September 14, 1950), is an Argentine operatic tenor, particularly associated with the Italian bel canto repertory, in which he is considered one of the best exponents in recent years.

Giménez was born in the small town of Carlos Pellegrini, Argentina. He studied at the Music Conservatory of Buenos Aires and made his operatic debut at the Teatro Colón as Ernesto in Don Pasquale, in 1980. After appearing in concert and opera throughout South America, he came to Europe in 1984, where he made his debut at the Wexford Festival in Ireland, in Cimarosa's Le astuzie femminili.

He made his American debut in Dallas in 1989, as Ernesto in Don Pasquale, and at the Metropolitan Opera New York his debut was as Count Almaviva in "Il Barbiere di Siviglia" in 1996.

He also appeared frequently in works by Donizetti and Bellini, as well as lesser known composers such as Salieri and Pacini.

Giménez has maintained a parallel career in the concert-hall. His 1987 Nimbus release Argentinian Songs, with pianist Nina Walker, included works by Ginastera and Guastavino, the lesser known Carlos Buchardo, and introduced composer Abraham Jurafsky to a global audience.

This article uses material from the article Raúl Giménez from the free encyclopedia Wikipedia and it is licensed under the GNU Free Documentation License.

Domenico Cimarosa Ouvertüre zur musikalischen Komödie “Il Fanatico burlato”
Update Required To play the media you will need to either update your browser to a recent version or update your Flash plugin.