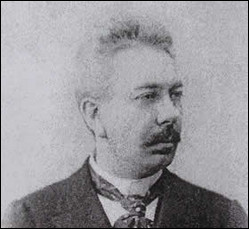 Pabst was born Christian Georg Paul Pabst in 1854, into a family of highly gifted musicians in Königsberg, capital of East Prussia. The young Pabst had a fortuitous meeting with Anton Rubinstein when the great pianist/composer travelled to Koenigsberg as overseer of cultural programmes there. Pabst moved to Russia as a most accomplished pianist in 1878. In the autumn of that year he accepted an invitation from Nikolai Rubinstein to teach at the Moscow Conservatory.

Peter Tchaikovsky frequently attended concerts given by Pabst, and used to refer to Pavel, as he was now known, as "a pianist of divine elegance", and "a pianist from God". Pabst was considered the greatest Professor of Piano at the Conservatory, and his students carried the great tradition of Russian romanticism into the 20th century. Pabst was considered one of the greatest pianists of his day, admired even by the great Franz Liszt. He and the young Sergei Rachmaninov performed many concerts together.

Until now Pabst has been known as a composer only for his piano transcriptions of the music for the ballet and opera by Tchaikovsky. He also fingered the piano concerto by Arensky, and was the soloist at its premiere. Pabsts piano transcriptions were loved by the most outstanding pianists of the time, and were considered to be on a par with those by the great Franz Liszt himself.

Paul Pabst died suddenly in 1897 in Moscow and was buried at Vvedenskoye Cemetery. His funeral wreath from the Russian Musical Society contained the epitaph: To Honored Artist - Indefatigable Professor - Hardly simply a man.

In 1885 he wrote his only orchestral work, the Piano Concerto in E-flat major. Its first performances were in St. Petersburg and Moscow, with Pabst as soloist, and with Anton Rubinstein conducting. The score was then lost, but has recently been discovered.

Both Tchaikovsky and Rachmaninov dedicated works to Pabst. Pabst was in illustrious company, and this is reflected in his Piano Concerto. It is an exquisite romantic work in three movements, lasting 33 minutes, full of wonderful tunes and a fiendishly difficult but lyrical solo part. On 19 April 2005, 120 years after its premiere, Pabst's 'Lost Concerto' was performed by Panagiotis Trochopoulos at a concert given in Minsk by the Belarusian State Academic Symphony Orchestra, conducted by Marius Stravinsky. A live recording was made.

This article uses material from the article Pavel Pabst from the free encyclopedia Wikipedia and it is licensed under the GNU Free Documentation License.