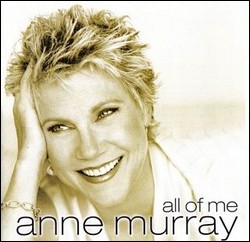 Morna Anne Murray CC, ONS (born June 20, 1945) is a Canadian singer. Murray has performed in pop, country and adult contemporary styles. So far, her albums have sold over 54 million copies.[1][2][3]

Murray was the first Canadian female solo singer to reach #1 on the U.S. charts, and also the first to earn a Gold record for one of her signature songs, "Snowbird" (1970).[4] She is often cited as the woman who paved the way for other Canadian international success stories such as Céline Dion, Sarah McLachlan and Shania Twain.[5][6] She is also the first woman and the first Canadian to win "Album of the Year" at the Country Music Association Awards for her 1984 album A Little Good News.

Murray was named the world's best female celebrity golfer by Golf For Women magazine in 2007.[8]

In 1965 Anne Murray appeared on the University of New Brunswick student project record "The Groove" (500 pressed). She sang two songs on the record - "Unchained Melody" and "Little Bit of Soap". On the label her name was misspelled "Anne Murry".[9]

After a summer of singing in local venues across the Maritimes, Murray began teaching Physical Education at a high school in Summerside, Prince Edward Island. After one year of teaching, she was offered a spot on a television show Let's Go, and returned to Singalong Jubilee.

Murray's debut album was on the Canadian Arc label, titled What About Me (Arc AS 782). The lead single was the cut of the same name, was written by Scott McKenzie, and was a sizable Canadian radio hit. The project was produced by Brian Ahern, and covered songs by Joni Mitchell, Ken Tobias and John Denver. After a year-long stint on Arc, Murray switched to Capitol Records in 1969 to record her second album, This Way Is My Way, which was released in the fall of the same year. This album featured the single that launched her successful career, "Snowbird", which became a #1 hit in Canada. "Snowbird" became a surprise hit on the U.S. charts as well, reaching #8 on the Billboard Hot 100 chart in 1970. It was also the first of eight #1 Adult Contemporary hits for Murray. The song led to Murray being awarded the first Gold record ever given to a Canadian artist in the United States (RIAA certified Gold on November 16, 1970).[4] As one of the most successful female artists at that time, Murray became in demand for several television appearances in Canada and the United States, eventually becoming a regular on the hit U.S. TV series The Glen Campbell Goodtime Hour.

She performed "O Canada" at the first American League baseball game played in Canada on April 7, 1977, when the Toronto Blue Jays played the Chicago White Sox at Exhibition Stadium.[10] Murray reprised the Canadian national anthem prior to Game 3 of the 1992 World Series at SkyDome.[11]

Murray was a celebrity corporate spokeswoman for The Bay, and she also did commercials and sang the company jingle ("You Can Count on the Commerce") for the Canadian Imperial Bank of Commerce (CIBC).[12]

Murray is a Companion of the Order of Canada, the highest honour that can be awarded to a Canadian civilian. She was a recipient of the Order of Nova Scotia in its inaugural year.[14][15]

In 1996, Murray signed on with a new manager, Bruce Allen, who also has managed careers for Bryan Adams, Michael Bublé, Martina McBride and Jann Arden. She recorded her first live album in 1997 and in 1999, she released What A Wonderful World, a Platinum selling inspirational album,[4] which went to Billboard #1 Contemporary Christian, # 4 Country and #38 on the pop charts. She released Country Croonin in 2002, the follow-up to her successful 1993 album, Croonin. In 2004, she released I'll Be Seeing You in Canada only, which features a collection of songs from the early 20th century through to the mid-1940s. The American version, titled All of Me, features a bonus disc containing many of her hit singles, followed in 2005.

In 2006 Murray received a tremendous honour: the Canadian Songwriters Hall of Fame chose Anne Murray and Leonard Cohen as recipients of the prestigious Legacy Award for their extraordinary contributions to and support of the Canadian songwriting industry. Murray was recognized for her unfailing support of Canadas songwriters, through her performances and her recordings.[16]

Anne Murray Duets: Friends and Legends was recorded in four cities - Toronto, Nashville, New York and Los Angeles. According to Billboard magazine, the album reached #2 on the Canadian pop album charts and was certified Double Platinum in Canada after merely two months, representing sales of over 200,000 units. Anne Murray Duets: Friends and Legends was the second-highest debuting CD on the Billboard Top 200 albums chart for the week ending February 2, 2008. It entered the chart at #42, making it her highest-charting U.S. CD release since 1999's What a Wonderful World, which peaked at #38 on the Top 200 and was certified Platinum by the Recording Industry Association of America (RIAA).[4] Also for the week ending February 2, 2008, the CD debuted at #8 on Billboard's Top Country Albums chart and at #3 on its Top Internet Albums chart.[18] Murray was nominated for the 2008 Juno Award for Album of the Year and Pop Album of the Year.[19][20]

On August 25, 2008 Murray appeared on the popular TV program Canadian Idol as a mentor.[29]

In January, 2009, Alfred A. Knopf Canada announced that Murray, in collaboration with author Michael Posner, would be writing a memoir of her private life and 40-year career in show business. The autobiography, titled All of Me, was released on October 27, 2009.[30] The autobiography is a self-portrait of Canadas first great female recording artist. All of Me documents Murray's life, from her childhood in the tragedy-plagued small coal-mining town of Springhill, Nova Scotia, to her success on the world stage. The book remains on Canada's non-fiction best sellers list.

Following the release of her autobiography, All of Me, Murray embarked on a 15-city book signing tour, starting in Nashville on October 27, 2009 and ending in Ottawa on November 24, 2009. The tour also included a special In Conversation interview with Michael Posner at the International Festival of Authors in Toronto on October 30, 2009.[31]

On February 12, 2010, Murray was one of the eight Canadians who carried the Olympic flag during the opening ceremonies of the XXI Olympic Winter Games in Vancouver.[32]

Morna Anne Murray was born on June 20, 1945, in the small coal-mining town of Springhill, Nova Scotia. Her father, James Carson Murray, was the town doctor and her mother, Marion Margaret Murray, was a registered nurse who focused her life on raising her family and community charity work. Murray was raised as the only girl in a family of five brothers - David, Daniel, Harold, Stewart and Bruce.[33]

After expressing an early interest in music, she studied piano for six years; by age fifteen, she began taking voice lessons. Every Saturday morning, she took a bus ride from Springhill to Tatamagouche, Nova Scotia, for her singing lesson with her teacher, Karen Mills. One of Murray's earliest performances was of the religious song "Ave Maria" at her high school graduation in 1962.[22]

Murray married Bill Langstroth on June 20, 1975, and gave birth to two children: William, in 1976, and the better-known of her children, Dawn Langstroth, in 1979, a singer/songwriter and artist who has recorded with her mother a number of times, including the duet "Let There Be Love" in 1999 for Murray's What A Wonderful World album. Anne and Dawn were featured in a mother-daughter duet of "Nobody Loves Me Like You Do" on Murray's hit 2008 U.S. CD (released in late 2007 in Canada), Anne Murray Duets: Friends & Legends, Murray's highest-charting release in nine years.

In recent years, Murray has faced many personal challenges: her departure from Capitol Records after more than a quarter-century; the apparent suicide of Gene MacLellan, the composer of her first hit single, "Snowbird", which hit #1 in both Canada and the U.S. and virtually established her international singing career overnight; the death of her beloved manager and close friend, Leonard T. Rambeau, from colon cancer; the separation and subsequent divorce from her husband, Bill; her daughter Dawn's battle with anorexia (Dawn and Anne reluctantly did the US talk-show circuit to raise awareness of the deadly affliction);[34] and most recently, the loss of her best friend to cancer (she recorded her 2005 album All of Me as a tribute to her).[22]

She emerged from those personal adversities in 1999 with her best-selling album in 20 years, What a Wonderful World, which was certified Platinum, and her 2002 CD Country Croonin was certified Gold by the RIAA.[4] Murray's 2007/2008 Anne Murray Duets: Legends & Friends CD was the second-highest debuting album on Billboard's Top 200 Albums chart (U.S.) for the week ending February 2, 2008, and was Murray's highest-charting album in the U.S. since What a Wonderful World was released in 1999. The CD also debuted on Billboard's Top Country Albums chart at #8 and Top Internet Albums chart at #3 for the same week.

Murray has always kept strong ties with her hometown, Springhill, Nova Scotia, located about an hour south of Moncton, New Brunswick, and two hours north of Halifax, Nova Scotia. The Anne Murray Centre, located in Springhill, houses a vast collection of memorabilia from both her personal life and professional career in a series of award winning, three-dimensional displays. The Anne Murray Centre, which opened on July 28, 1989, is a registered Canadian charity. As a non-profit association, all the revenue generated from its operation is used to provide employment for local people and for its ongoing maintenance. The Anne Murray Centre has successfully fostered tourism in the area and has promoted awareness of the music of Nova Scotia and Canada.[35]

Murray's personal success combined with her visible love and support for Springhill was featured in the article, Women of Success Impact on The Economy of Their Hometowns, in Progressive Choices Canadian Women In Business magazine (Summer/Fall 2004 edition).

When a devastating tsunami brought tragedy on December 26, 2004, Anne Murray joined other Canadian music stars in the Canada for Asia Telethon, a three-hour, tsunami relief concert broadcast on CBC Television (January 13, 2005) to support CARE Canadas efforts. Bryan Adams and Murray closed the show with a duet, "What Would It Take".[37]

Environmental awareness is another area for which Murray is passionate, and she has been a public supporter of renowned Canadian environmentalist and geneticist Dr. David Suzukis Nature Challenge.[38]

Anne Murray has also been involved in a variety of charitable organizations. In addition to being the Honorary National Chairperson of the Canadian Save The Children Fund,[39] she has served as a spokeswoman for many charities throughout her career - most recently Colon Cancer Canada. On May 20, 2009, Colon Cancer Canada launched the inaugural Anne Murray Charity Golf Classic. Over $150,000 was raised through the event.[40]

Murray's father, Dr. Carson Murray, died in 1980 at the age of 72 from complications from leukemia. Her mother, the former Marion Margaret Burke, died April 10, 2006, at the age of 92 after suffering a series of strokes during heart surgery.[22]

A longtime golf enthusiast, Murray made history in October 2003 at the Turning Stone Resort & Casino in Verona, New York, by becoming the first woman to score a hole-in-one on the 108-yard, par 3, 17th hole at the Kaluhyat Golf Club.[41]

This article uses material from the article Anne Murray from the free encyclopedia Wikipedia and it is licensed under the GNU Free Documentation License.