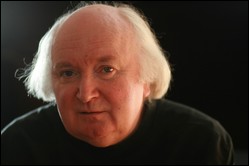 born in in Dublin, Ireland

Míeál O'Rourke is an Irish pianist who is best known for his recordings of works by John Field.[1]

Born and raised in Dublin,[2] O'Rourke obtained a degree in music from University College, Dublin. Shortly after graduation, he moved to Paris where he has lived ever since.[3] On December 12, 1976 he gave his first public recital in France, playing an all-Chopin programme.[4] He studied piano under Marcel Ciampi, a pupil of Debussy.[3]

O'Rourke has increased the availability of John Field's works considerably through his recordings of all the piano concerti, sonatas, and nocturnes.

In 1994, O'Rourke was awarded the Chopin Medal by the Fryderyk Chopin Society of Warsaw in recognition of his "outstanding Chopin playing".[5]

This article uses material from the article Mícéal O'Rourke from the free encyclopedia Wikipedia and it is licensed under the GNU Free Documentation License.

Mélanie Bonis Soir, für Violine, Violoncello und Klavier op.76
Update Required To play the media you will need to either update your browser to a recent version or update your Flash plugin.