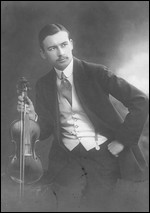 Franz von Vecsey (Hungarian: Vecsey Ferenc, 23 March 18935 April 1935) was a Hungarian violinist and composer, who became a well-known virtuoso in Europe through the early 20th century.

He was born in Budapest[1] and began his violin studies with his father, Lajos Vecsey, and at the age of eight he entered the studio of Jen Hubay. Two years later, aged ten, he played for Joseph Joachim in Berlin and subsequently became known as a stellar child prodigy virtuoso.

He became one of the pre-eminent violinists in Europe in the 1910s and '20s, at one point touring with Béla Bartók as his piano accompanist. Aged only 12, he became the re-dedicatee of Jean Sibelius's Violin Concerto in D minor in 1905, after the original dedicatee, Willy Burmester, refused to play the work after he was unable to appear at the premiere of the revised version and it was premiered by Karel Halí instead. Vecsey championed the Sibelius concerto, first performing at when he was only 13,[2] although he could not adequately cope with the extraordinary technical demands of the work.[3] He was also the dedicatee of Hubay's Violin Concerto No. 3.[4] He also spent time composing, and wrote a number of virtuosic salon pieces for the violin.

His career steadily faltered after the First World War, as he grew tired of constant touring and wanted to concentrate more on conducting. By the 1930s, he was about to embark on that dream, but it suddenly curtailed when in 1935, he became seriously ill with a pulmonary embolism that grew through much of his life. He sought medical care in Rome. The operation was unsuccessful, and Vecsey succumbed to the disease at the age of 42.[1]

This article uses material from the article Franz von Vecsey from the free encyclopedia Wikipedia and it is licensed under the GNU Free Documentation License.

Emile Waldteufel Die Schlittschuhläufer, Walzer op. 183
Update Required To play the media you will need to either update your browser to a recent version or update your Flash plugin.