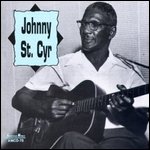 St. Cyr was born in New Orleans, Louisiana. Before moving to Chicago in 1923, he played for several leading New Orleans bands.[1] He is most commonly remembered as a member of Louis Armstrong's Hot Five and Hot Seven bands.[2] He also played with Jelly Roll Morton's Red Hot Peppers. He composed the popular standard Oriental Strut, noted for its adventurous chord sequence.

From 1961 until his death in 1966, St. Cyr was the bandleader of the Young Men From New Orleans,[2] who performed at Disneyland.[2] He died in Los Angeles, California,[1] and is buried in Evergreen Cemetery, Los Angeles.[1]

This article uses material from the article Johnny St. Cyr from the free encyclopedia Wikipedia and it is licensed under the GNU Free Documentation License.