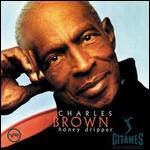 Tony Russell "Charles" Brown (September 13, 1922 – January 21, 1999), born in Texas City, Texas was an American blues singer and pianist whose soft-toned, slow-paced blues-club style influenced the development of blues performance during the 1940s and 1950s. He had several hit recordings, including "Driftin' Blues" and "Merry Christmas Baby".[1]

In the late 1940s, a rising demand for blues was driven by an increasing white teenage audience in the South which quickly spread north and west. Blues singers such as Louis Jordan, Wynonie Harris and Roy Brown were getting much of the attention, but what writer Charles Keil dubs "the postwar Texas clean-up movement in blues" was also beginning to have an influence, driven by Blues artists such as T-Bone Walker, Amos Milburn and Charles Brown. Their singing was lighter, more relaxed and they worked with bands and combos that had saxophone sections and used arrangements.[2]

Born in Texas City, Texas, Brown graduated from Central High School of Galveston, Texas in 1939 and Prairie View A&M College in 1942 with a degree in chemistry. He then became a chemistry teacher at George Washington Carver High School of Baytown, Texas, a mustard gas worker at the Pine Bluff Arsenal at Pine Bluff, Arkansas, and an apprentice electrician at a shipyard in Richmond, California before settling in Los Angeles in 1943.[3]

As a child, Brown demonstrated his love of music and took classical piano lessons. Early on, Brown moved out to Los Angeles, where the great influx of blacks created an integrated nightclub scene in which black performers tended to minimize the rougher blues elements of their style. The blues club style of a light rhythm bass and right-hand tinkling of the piano and smooth vocals became popular, epitomized by the jazz piano of Nat King Cole. When Cole left Los Angeles to perform nationally, his place was taken by Johnny Moore's Three Blazers, featuring Charles Brown's gentle piano and vocals.[4]

Brown signed with Aladdin Records and his 1945 recording of, "Driftin' Blues", with a small combo on that record label went on the U.S. Billboard R&B chart for six months, putting Brown at the forefront of a musical evolution that changed American musical performance.[5] His style dominated the influential Southern California club scene on Central Avenue during that period and he influenced such performers as Floyd Dixon, Cecil Gant, Ivory Joe Hunter, Percy Mayfield, Johnny Ace and Ray Charles.[4]

"Driftin' Blues" was the first of several hits. Brown subsequently released "Get Yourself Another Fool", "Black Night", "Hard Times" and "Trouble Blues", all major hits in the early 1950s on such labels as Modern Records as well as Aladdin.[1] Though he was unable to compete with the burgeoning rock and roll sound that was increasing in popularity, he managed to maintain a small, devoted audience. Additionally, his songs were covered by the likes of John Lee Hooker and Lowell Fulson.

Brown's approach was too mellow to survive the transition to rock's harsher rhythms, and he faded from the national limelight. His "Please Come Home for Christmas", a hit in 1960 on the King Records remained seasonally popular.[1] "Please Come Home for Christmas" sold over one million copies by 1968, and was awarded a gold disc in that year.[6] During the 1960s Brown recorded a couple of albums for Mainstream Records.

In the 1980s he made a series of appearances at New York City nightclub Tramps. As a result of these appearances he signed a new recording contract with Blue Side Records and recorded One More for the Road in three days. Blue Side Records closed soon after but distribution was picked up by Alligator Records. Soon after the success of One More for the Road, Bonnie Raitt helped usher in a Charles Brown comeback tour.[7]

He began a recording and performing career again, under the musical direction of guitarist Danny Caron, to greater success than he had achieved since the 1950s. Other members of Charles' touring ensemble included Clifford Solomon on tenor saxophone, Ruth Davies on bass and Gaylord Birch on drums. [1] Several records received Grammy Award nominations.

He is a member of the Rock and Roll Hall of Fame,[8] and received both the National Endowment for the Arts' National Heritage Fellowship[9] and the W. C. Handy Award.[10]

Brown died of congestive heart failure in 1999 in Oakland, California,[11] and was interred at Inglewood Park Cemetery, Inglewood, California.[7]

CD compilations and other releases of note

This article uses material from the article Charles Brown (musician) from the free encyclopedia Wikipedia and it is licensed under the GNU Free Documentation License.