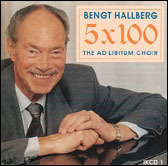 Born in Gothenburg, he studied classical piano from an early age, and wrote his first jazz arrangement at the age of 13. At the age of 15 he recorded his first record as a member of a group led by bassist Thore Jederby[4] and in 1949 he recorded with the Swedish alto saxophonist Arne Domnérus for the first time, and the two musicians continued to play together for several decades.

During the 1950s, Hallberg played with leading visiting American players, including the tenor saxophonist Stan Getz, recording "Dear Old Stockholm" (originally "Ack Värmeland du sköna") with him, and alto player Lee Konitz in 1951, and trumpeters Clifford Brown and Quincy Jones in 1953. Jones first recorded arrangement featured Hallberg.[3][5] In the same period he worked with baritone saxophonist Lars Gullin, another leading Swedish player of the time. Both players were associated with the 'Cool Jazz' scene in their country, influenced by the American school around pianist Lennie Tristano, a Hallberg favourite[6] with whom Konitz was associated.

Hallberg had a versatile style and in his later years he wrote music for film and television, as well as choral arrangements, and he also played the accordion. With Domnerus and Georg Riedel among others, he participated in the Jazz at the Pawnshop sessions in December 1976. According to Chris Mosey, while Hallberg was: "usually an extremely delicate and very measured player, [he] was obviously affected by the general ambience, and here and there cuts loose with awesome force".[7]

He died from congestive heart failure.[8]

This article uses material from the article Bengt Hallberg from the free encyclopedia Wikipedia and it is licensed under the GNU Free Documentation License.

Charles Gounod Finale aus der Sinfonie Nr. 1 D-Dur
Update Required To play the media you will need to either update your browser to a recent version or update your Flash plugin.