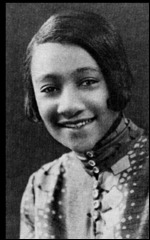 Hunter was born in Memphis, Tennessee,[2][6] to Laura Peterson, who worked as a maid in a Memphis brothel, and Charles Hunter, a Pullman porter.[3] Hunter said she never knew her father. She attended Grant Elementary School, off Auction Street, which she called Auction School, in Memphis.[7] She attended school until around age 15.[8]

Hunter had a difficult childhood. Her father left when she was a child, and to support the family her mother worked as a servant in a brothel in Memphis, although she married again in 1906. Hunter was not happy with her new family and left for Chicago, Illinois, around the age of 11, in the hopes of becoming a paid singer; she had heard that it paid 10 dollars per week. Instead of finding a job as a singer she had to earn money by working at a boardinghouse that paid six dollars a week as well as room and board. Hunter's mother left Memphis and moved in with her soon afterwards.[9]

Hunter began her singing career in a bordello and soon moved to clubs that appealed to men, black and white alike. By 1914 she was receiving lessons from a prominent jazz pianist, Tony Jackson, who helped her to expand her repertoire and compose her own songs.[8]

She was still in her early teens when she settled in Chicago.[10] Part of her early career was spent singing at Dago Frank's, a brothel. She then sang at Hugh Hoskin's saloon and, eventually, in many Chicago bars.

One of her first notable experiences as an artist was at the Panama Club, a white-owned club with a white-only clientele that had a chain in Chicago, New York and other large cities. Hunter's first act was in an upstairs room, far from the main event; thus, she began developing as an artist in front of a cabaret crowd. "The crowd wouldn't stay downstairs. They'd go upstairs to hear us sing the blues. That's where I would stand and make up verses and sing as I go along." Many claim her appeal was based on her gift for improvising lyrics to satisfy the audience.[11] Her big break came when she was booked at Dreamland Cafe, singing with King Oliver and his band.[12]

She peeled potatoes by day and hounded club owners by night, determined to land a singing job. Her persistence paid off, and Hunter began a climb from some of the city's lowest dives to a headlining job at its most prestigious venue for black entertainers, the Dreamland ballroom. She had a five-year association with the Dreamland, beginning in 1917, and her salary rose to $35 a week.[13]

She first toured Europe in 1917, performing in Paris and London. The Europeans treated her as an artist, showing her respect and even reverence, which made a great impression on her.[13]

Her career as singer and songwriter flourished in the 1920s and 1930s, and she appeared in clubs and on stage in musicals in both New York and London. The songs she wrote include the critically acclaimed "Downhearted Blues" (1922).[14]

She recorded several records with Perry Bradford from 1922 to 1927.

Hunter wrote "Downhearted Blues" with Lovie Austin and recorded the track for Ink Williams at Paramount Records. She received only $368 in royalties. Williams had secretly sold the recording rights to Columbia Records in a deal in which all royalties were paid to him. The song became a big hit for Columbia, with Bessie Smith as the vocalist. This record sold almost 1 million copies. Hunter learned what Williams had done and stopped recording for him.[12][13]

In 1928, Hunter played Queenie opposite Paul Robeson in the first London production of Show Boat at Drury Lane. She subsequently performed in nightclubs throughout Europe and appeared for the 1934 winter season with Jack Jackson's society orchestra at the Dorchester, in London. One of her recordings with Jackson is "Miss Otis Regrets".[17]

While at the Dorchester, she made several HMV recordings with the orchestra and appeared in Radio Parade of 1935 (1934),[17] the first British theatrical film to feature the short-lived Dufaycolor, but only Hunter's segment was in color. She spent the late 1930s fulfilling engagements on both sides of the Atlantic and the early 1940s performing at home.

Hunter eventually moved to New York City. She performed with Bricktop and recorded with Louis Armstrong and Sidney Bechet. She continued to perform on both sides of the Atlantic, and as the head of the U.S.O.'s first black show, until her mother's death.

In 1944, she took a U.S.O. troupe to Casablanca and continued entertaining troops in both theatres of war for the duration of World War II and into the early postwar period.[17] In the 1950s, she led U.S.O. troupes in Korea, but her mother's death in 1957 led her to seek a radical career change.

Hunter said that when her mother died in 1957, because they had been partners and were so close, the appeal of performing ended for her.[18] She reduced her age, "invented" a high school diploma, and enrolled in nursing school, embarking on a career in health care, in which she worked for 20 years at Roosevelt Island's Goldwater Memorial Hospital.

The hospital forced Hunter to retire because it believed she was 70 years old. Hunter—who was actually 82 years old—decided to return to singing. She had already made a brief return by performing on two albums in the early 1960s, but now she had a regular engagement at a Greenwich Village club, becoming an attraction there until her death, in October 1984.

Hunter was still working at Goldwater Memorial Hospital in 1961 when she was persuaded to participate in two recording sessions. In 1971 she was videotaped for a segment of a Danish television program, and she taped an interview for the Smithsonian Institution.[19] That same year record producer Chris Albertson asked her to break an 11-year absence from the recording studio. The result was her participation (four songs) on a Prestige Bluesville Records album, Songs We Taught Your Mother. The following month, Albertson recorded her again, this time for Riverside Records, reuniting her with Lil Hardin Armstrong and Lovie Austin, both of whom she had performed with in the 1920s. Hunter enjoyed these outings but had no plans to return to a career as a singer. She was prepared to devote the rest of her life to nursing, but the hospital retired her in 1977, when it believed she had reached retirement age (she was then 82).

In the summer of 1976, Hunter attended a party for her long-time friend Mabel Mercer, hosted by Bobby Short. Music public relations agent Charles Bourgeois asked Hunter to sing and connected her with the legendary owner of Cafe Society, Barney Josephson.[5][20] Josephson offered Hunter a limited engagement at his Greenwich Village club, The Cookery. Her two-week appearance there was a huge success, turning into a six-year engagement and a revival of her career in music.[5]

Impressed with the attention paid her by the press, John Hammond signed Hunter to Columbia Records. He had not previously shown interest in Hunter, but he had been a close associate of Barney Josephson decades earlier, when the latter ran the Café Society Uptown and Downtown clubs. Her Columbia albums, The Glory of Alberta Hunter, Amtrak Blues (on which she sang the jazz classic "Darktown Strutters' Ball"), and Look For the Silver Lining, did not sell as well as expected, but sales were nevertheless healthy. There were also numerous appearances on television programs, including To Tell the Truth (in which panelist Kitty Carlisle had to recuse herself, the two having known each other in Hunter's heyday). She also had a walk-on role in Remember My Name, a 1978 film by the producer Robert Altman, for which he commissioned her to write and to perform the soundtrack music.[14]

As capacity audiences continued to fill The Cookery nightly, concert offers came from Brazil to Berlin, and there was an invitation for her to sing at the White House. At first, she turned it down, because, she explained, "they wanted me there on my day off," but the White House amended its schedule to suit the veteran artist. During that time, there was also a visit from former First Lady turned book editor Jackie Onassis, who wanted to sign her for an autobiography but was unhappy with the co-author assigned to the project. The book was eventually done for another publisher, with the help of writer Frank Taylor.

Hunter's comeback lasted six years. She toured in Europe and South America, made more television appearances, and enjoyed her renewed recording career as well as the fact that record catalogs now once again contained her old recordings, going back to her 1921 debut on the Black Swan label.

In 1919, Hunter married Willard Saxby Townsend, a former soldier[21] who later became a labor leader for baggage handlers via the International Brotherhood of Red Caps, was short-lived.[5][22][23] They separated within months, as Hunter did not want to quit her career. They were divorced in 1923.[24]

Hunter was a lesbian but kept her sexuality relatively private.[24] In August 1927, she sailed for France, accompanied by Lottie Tyler, the niece of the well-known comedian Bert Williams. Hunter and Tyler had met in Chicago a few years earlier. Their relationship lasted until Tyler's death, many years later.[25]

Hunter is buried[26] in the Ferncliff Cemetery and Mausoleum in Hartsdale, Westchester County, New York (Elmwood section, plot 1411), the location of many celebrity graves.[27][28]

Hunter's life was documented in Alberta Hunter: My Castle's Rockin' (1988 TV movie), a documentary written by Chris Albertson and narrated by the pianist Billy Taylor, and in Cookin' at the Cookery, a biographical musical by Marion J. Caffey, which has toured the United States in recent years with Ernestine Jackson as Hunter.

This article uses material from the article Alberta Hunter from the free encyclopedia Wikipedia and it is licensed under the GNU Free Documentation License.