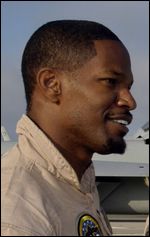 Not to be confused with Jamie Fox.

Eric Marlon Bishop (born December 13, 1967), professionally known as Jamie Foxx, is an American actor, stand-up comedian, and singer. For his work in the film Ray, Foxx won the Academy Award and the British Academy of Film and Television Arts (BAFTA) Award for Best Actor. He has also won a Golden Globe Award for Best Actor in a musical/comedy and has been nominated for several Grammy Awards.

Foxx was born Eric Marlon Bishop on December 13, 1967, in Terrell, Texas.[1] He is the son of Louise Annette Talley Dixon and Darrell Bishop. Bishop was a stock broker who changed his name to Shahid Abdula after converting to Islam. Foxx was abandoned seven months after birth and was raised in Terrell by his mother's adoptive parents, Estelle and Mark Talley. Terrell was a racially segregated community at the time.[2] He had a strict Baptist upbringing.[3][4] Foxx began piano lessons at the age of five by his grandmother's orders. As a teenager, he was a part-time pianist and choir leader in Terrell's New Hope Baptist Church.[2]

Foxx attended Terrell High School, where he received top grades, played basketball and football as quarterback, and had an ambition to play for the Dallas Cowboys. He was the first player in the school's history to pass for more than 1,000 yards.[2][5] He also sang in a band called Leather and Lace.[2] After completing high school, Foxx received a scholarship to United States International University, where he studied classical music and composition.[2][6] He has often acknowledged his grandmother's influence in his life as one of the greatest reasons for his success.[3][7]

Early career and In Living Color

After accepting a girlfriend's dare, Foxx told jokes and did impressions at a comedy club's open mic night in 1989. When he found that female comedians were often called first to perform, he changed his name to Jamie Foxx, feeling that it was an ambiguous enough name to disallow any biases.[2][8] He chose his surname as a tribute to comedian Redd Foxx.[8]

Foxx joined the cast of In Living Color in 1991 and subsequently played a recurring role in the comedy-drama sitcom Roc.[9] From 1996 to 2001, Foxx starred in his own sitcom The Jamie Foxx Show, and in 1997 he made his film debut.

Foxx made his film debut in the 1992 comedy Toys. His first dramatic role came in Oliver Stone's 1999 film Any Given Sunday, where he portrayed a hard-partying American football player.[3] He was cast in the role in part because of his background as a football player.[3] Foxx has since evolved into a respected dramatic actor. Following Any Given Sunday, Foxx was featured as taxi driver Max Durocher in the film Collateral alongside Tom Cruise, for which he received outstanding reviews and a nomination for the Academy Award for Best Supporting Actor.[3] His standout performance, however, was his portrayal of Ray Charles in the biopic Ray (2004), for which he won the Academy Award for Best Actor[3] and the BAFTA Award for Best Actor in a Leading Role.

Foxx is the second male, and the first African American, in history to receive two acting Oscar nominations in the same year for two different movies, Collateral and Ray. The only other male actor to achieve this was Al Pacino. In 2005, Foxx was invited to join the Academy of Motion Picture Arts and Sciences.[10]

Following these successes, Foxx appeared in Jarhead, Miami Vice, and Dreamgirls, which were box-office hits, and lifted his profile even higher as a bankable star in Hollywood. 2007 brought him the lead role in the film The Kingdom opposite Chris Cooper, Jennifer Garner and Ashraf Barhom.

In September 2007, Foxx was awarded a star on the Hollywood Walk of Fame. He said, upon receiving the honor, "[it was] one of the most amazing days of my life."[11]

In May 2009 Foxx played the lead role in the dramatic film The Soloist.

Foxx began piano lessons at age five. In 1994, Foxx released an album (on the Fox record label) entitled Peep This. His music career shifted into a higher gear when, in 2004, he was featured on rapper Twista's song, "Slow Jamz", which also featured Kanye West. The song reached number one on the U.S. Billboard Hot 100 singles chart, as well as number three on the UK singles chart. Foxx's second collaboration with Kanye West, "Gold Digger," in which he sang the "I Got a Woman" Ray Charles-influenced hook, went straight to number one on the Billboard Hot 100, and remained there for 10 weeks. In 2005, Foxx was featured on the single "Georgia" by Atlanta rappers Ludacris and Field Mob. The song sampled Ray Charles' hit "Georgia on My Mind."

Foxx released his second studio album, Unpredictable in December 2005. It debuted at number two, selling 598,000 copies in its first week.[12] The following week, the album rose to number one, selling an additional 200,000 copies.[13] To date, the album has sold 1.98 million copies in the United States, and was certified double Platinum by the RIAA.[14][15] The album also charted on the UK Albums Chart, where it peaked at number nine.[16] Foxx became the fourth artist to have won an Academy Award for an acting role and to have achieved a number-one record album in the US. (The other three to accomplish this feat were Frank Sinatra, Bing Crosby, and Barbra Streisand.) Foxx's first single from the album, the title track "Unpredictable" (featuring Ludacris), samples "WildFlower" by New Birth. The song peaked inside the top 10 of the Billboard Hot 100 and also made the UK top 20 singles chart. The second US single from the album was "DJ Play a Love Song," which reunited Foxx with Twista. In the UK, however, the second single was "Extravaganza," which saw Foxx once again collaborate with Kanye West. He was not, however, featured in the song's music video.

At the 2006 Black Entertainment Television (BET) Awards, Foxx won Best Duet/Collaboration with Kanye West for "Gold Digger" and tied with Mary J. Blige's "Be Without You" for Video of the year. On December 8, 2006, Foxx received four Grammy nominations, which included Best R&B Performance by a Duo or Group with Vocals for Love Changes featuring Mary J. Blige, Best R&B Album for Unpredictable, Best Rap Performance by a Duo or Group for Georgia by Ludacris & Field Mob featuring Jamie Foxx, and Best Rap/Sung Collaboration for Unpredictable featuring Ludacris.

On January 22, 2007, Foxx was on Sirius Satellite Radio, announcing his new channel The Foxxhole. The channel features comedy and music primarily by African-American performers, and features much of Foxx's own material as well. The Jamie Foxx Show, a talk-radio program, airs Friday evenings on The Foxxhole, and features Johnny Mack, Speedy, Claudia Jordan, The Poetess, and Lewis Dix as his co-hosts. Guests include popular musicians, actors, and fellow comedians.

He recorded a song with country superstars Rascal Flatts entitled "She Goes All the Way" for their album, Still Feels Good. Foxx also performed background vocals for artist/songwriter Tank. He and The-Dream are featured on Plies' "Please Excuse My Hands." He also appeared on the remix of Ne-Yo's "Miss Independent" entitled "She Got Her Own." The track also features Fabolous. Foxx then collaborated with rapper The Game on the track "Around The World."

Foxx released his third album titled Intuition featuring such artists as Kanye West, T.I., Lil Wayne, and T-Pain. The album's first single, "Just Like Me" featuring T.I., was promoted by a video directed by Brett Ratner and featuring an appearance by Taraji P. Henson. The second single "Blame It" featured T-Pain and became a top 5 single on the Billboard Hot 100 and a number-one single on the Billboard Hot R&B/Hip-Hop Songs chart. The "Blame It" music video, directed by Hype Williams, features cameo appearances by Forest Whitaker, Samuel L. Jackson, Ron Howard, Quincy Jones, and Jake Gyllenhaal, among others. Foxx was also featured on T.I.'s single "Live in the Sky" from the album King.

Foxx has a daughter, Corinne Bishop, who was born in 1995.[2] Former Jamie Foxx Show co-star Garcelle Beauvais-Nilon made a public announcement on The Wendy Williams Show stating that Foxx has a second child.[17]

Foxx performed a public service announcement for Do Something to promote food drives in local communities.[18]

On the April 17, 2009 episode of The Jamie Foxx Show on Foxxhole Radio, Foxx and his co-hosts made several sexually suggestive, racial, and disparaging jokes regarding teenaged singer Miley Cyrus, in response to a caller's comment on a recent altercation between Cyrus and rock band Radiohead.[19] Foxx issued a public apology on The Tonight Show with Jay Leno Show several days later in response to growing public outcry as well as televised criticism by Cyrus's father, country singer Billy Ray Cyrus.[20]

In April 2003, Foxx was involved in an incident with two police officers who were attempting to escort him and his sister out of Harrah's casino in New Orleans. Employees claimed they had failed to show identification upon entry. Originally charged with trespassing, disturbing the peace, battery on police officers and resisting arrest, Foxx pleaded no contest to disturbing the peace in exchange for the other charges being dropped, and was sentenced to a six month suspended jail term with two years probation and a $1500 fine.[21][22]

Jamie Foxx hosted the 2009 BET Awards ceremony on June 28, 2009, which featured several tributes to pop star Michael Jackson, who had died three days prior to the show. Aside from performing "Blame It" with T-Pain and "She Got Her Own" with Ne-Yo and Fabolous, Foxx opened the show with a rendition of Jackson's "Beat It" dance routine and closed the show with a cover of The Jackson 5's "I'll Be There" with Ne-Yo. Foxx stated during the ceremony, "We want to celebrate this black man. He belongs to us and we shared him with everybody else."

This article uses material from the article Jamie Foxx from the free encyclopedia Wikipedia and it is licensed under the GNU Free Documentation License.