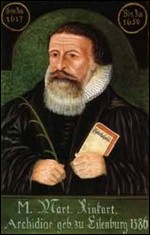 Martin Rinkart, or Rinckart (23 April 1586 8 December 1649) was a German clergyman and hymnist. He is best known for the text to "Now thank we all our God" (Nun danket alle Gott), which was written ca. 1636. It was set to music by Johann Crüger about 1647, and translated into English in the 19th century by Catherine Winkworth.

Rinkart was a deacon at Eisleben and archdeacon at Eilenburg, where he was born and also died. He served there during the Thirty Years' War and a severe plague in 1637.

German pastor Martin Rinkart served in the walled town of Eilenburg during the horrors of the Thirty Years' War of 1618-1648. Eilenburg became an overcrowded refuge for the surrounding area. The fugitives suffered from epidemic and famine. At the beginning of 1637, the year of the Great Pestilence, there were four ministers in Eilenburg. But one abandoned his post for healthier areas and could not be persuaded to return. Pastor Rinkart officiated at the funerals of the other two. As the only pastor left, he often conducted services for as many as 40 to 50 persons a daysome 4,480 in all. In May of that year, his own wife died. By the end of the year, the refugees had to be buried in trenches without services.

Now Thank We All Our God

Main article: Now Thank We All Our God

Yet living in a world dominated by death, Pastor Rinkart wrote the following prayer for his children to offer to the Lord:

Now thank we all our God
With hearts and hands and voices;
Who wondrous things hath done,
In whom this world rejoices.
Who, from our mother's arms,
Hath led us on our way,
With countless gifts of love,
And still is ours today.

This article uses material from the article Martin Rinkart from the free encyclopedia Wikipedia and it is licensed under the GNU Free Documentation License.