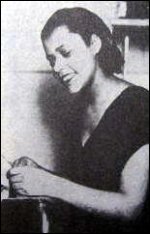 Midge Williams (May 27, 1915 January 9, 1952) was an African-American swing and jazz vocalist during the 1930s and 1940s. Although not as famous as other jazz recording artists, Williams was a respected singer and her group, Midge Williams and Her Jazz Jesters, made several well-received recordings during the late 1930s.

She was born Virginia Louise Williams, but she was known by her nickname "Midge" to distinguish her from her mother, also named Virginia Louise. She grew up in the African American agricultural community of Allensworth, California, United States, in Tulare County. Williams' grandfather, Joshua Singleton, was the son of the black separatist leader Benjamin "Pap" Singleton. Joshua Singleton moved his family to Allensworth when the colony was founded in 1909, and the Singletons became prominent members of the Allensworth community. Virginia Louise Williams, Midge's mother, helped run Singleton's grocery store and helped obtain a Girl Scouts of the USA charter for the Allensworth settlement.

Allensworth had problems with arsenic in the groundwater supply, and when promised new sources of water did not appear, the economic hopes of the community began to falter. Many residents had to leave, including the Williams family. Her mother moved to Oakland in 1925, while Midge and her brothers, John, Lewis, Charles, and Robert, remained in Allensworth. In 1929, Midge and her brothers joined her newly remarried mother and her uncle, Henry Singleton, in Berkeley, California.

Williams came from a talented family. Her grandfather Joshua had been a music teacher, her mother Virginia Louise was a dance teacher, and her uncle Henry played the violin. She also had a half-brother named Lester Williams who worked as a jazz musician. Williams and three of her brothers formed a singing and dancing act called the Williams Quartette. The group performed regularly in churches and theaters in and around the San Francisco Oakland area.

During performances of the Williams Quartette in the early 1930s, Roger Seguire saw the act and signed on to be the group's manager. Seguire was a pianist with experience in Asia, and he booked the group for a tour of China and Japan. In 1933, the Williams Quartette went to Shanghai, China, to perform at the Canidrome. In 1934, in Japan, Williams made the first recording of her career, singing jazz songs in both English and Japanese.

In August 1934, the Williams Quartette returned to California, but shortly thereafter Midge's brother Charles died from a gunshot accident. Midge took up residence in Berkeley, and in the summer of 1935 became a regular performer on the radio program Blue Monday Jamboree. In early 1936 she met Al Jolson, and sang on his Shell Chateau radio program. By the summer of 1936, Williams moved to New York City, and performed several times on Rudy Vallée's radio show. Her singing voice won her a position doing a series of twice-weekly, 15 minute "sustainer programs" of songs for the NBC Blue Network. In early 1937, she did a weekly series of songs for the NBC Red Network.

During her time in New York, Williams appeared on a number of other radio programs, including: the RCA Magic Key series, the Studebaker Champions Show, and Ben Bernies Show. In 1936 Williams began her American recording career on various record labels, and by 1937 she was recording songs with her band, Midge Williams and Her Jazz Jesters. Members of the Jazz Jesters included Raymond Scott, Frankie Newton, Buster Bailey, and Charlie Shavers. While living in New York, Williams performed at Harlem venues, including the Apollo Theater and the Savoy Ballroom. She also appeared with several other jazz musicians, including Lil Armstrong, Bunny Berigan, Harry James, John Kirby, Glenn Miller, Fats Waller, Ben Webster, and Teddy Wilson.

In 1938, Williams joined the Louis Armstrong orchestra, and toured with him across the country, although no recordings of Williams with Armstrong were made.

In 1941, Williams left the Louis Armstrong orchestra and entered into a Detroit hospital. Whether for health or other reasons, her career largely ended at that point. She performed in public only one more time, appearing on the Jack Webb radio show in 1946. From there she slipped into obscurity. On January 9, 1952, Williams died from tuberculosis, at the age of 36. Williams was cremated and her ashes interred in San Francisco.

There are few references to Midge Williams, but information about her life can be found in the following resources.

This article uses material from the article Midge Williams from the free encyclopedia Wikipedia and it is licensed under the GNU Free Documentation License.