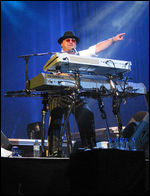 David Frank Paich (born June 25, 1954) is an American keyboardist, singer, composer, recording producer, and arranger, best known for his work with the rock band Toto. With Toto, Paich has released 17 albums and sold over 30 million records. Additionally, Paich has contributed to a host of artists with his songwriting and arrangements including working with Boz Scaggs extensively in the 1970s and Michael Jackson in the 1980s.

He is the son of jazz composer, musician, and arranger Marty Paich.[1] Paich is of Croatian descent.

A prolific writer of chart-performing songs, Paich wrote or co-wrote such tracks as "Hold the Line", "99", "Lowdown", "Lido Shuffle", "Georgy Porgy", "Rosanna", "Hydra", "Holyanna", "Pamela", "Got To Be Real", and "Lady Love Me (One More Time)", and "Miss Sun". He also performed lead vocals on the Toto hits "Africa", "Lovers in the Night", and "Stranger in Town".

Paich remained with Toto from the beginning of the band in 1977 to 2004 and performed on only a few shows until their disbandment in 2008. Session keyboardist Greg Phillinganes joined Toto in 2003 as an additional keyboardist for both studio projects and tour dates. In 2010, Paich resumed performing with Toto, and is the current keyboard player alongside other original member Steve Porcaro.

Session and side projects

He has co-writing credits with Boz Scaggs on the songs "What Can I Say", "Lowdown", and "Lido Shuffle" from the multi-platinum album Silk Degrees, and occasionally still sits in on keyboards with Boz Scaggs' band. As songwriter he wrote or co-wrote songs for Cher, The Jacksons, Andy Williams, George Benson, Glen Campbell, Jon Anderson (Yes), and Chicago. As arranger he worked for Michael Jackson, Rod Stewart, Patti Austin, Donna Summer, Doobie Brothers and many more.

In the early and mid '80s, Paich often worked with well-known producers Quincy Jones and David Foster. Paich was a part of the session group on the Michael Jackson album Thriller. He played piano, synthesizer, and did some synth and rhythm arrangements.

In 1989, Paich produced and arranged the Oscar-nominated song "The Girl Who Used to Be Me", written by Marvin Hamlisch and Alan & Marilyn Bergman, for the film Shirley Valentine and produced the song "I'll Be Holding On", written by Hans Zimmer and Will Jennings, for the film Black Rain.

David Paich traveled to China where he worked composing theme music for the 2008 Summer Olympics. In 2009, he sang the hit song "Africa" at the Millennium Development Goals awards in New York and co-produced a new tune for George Benson. Paich was involved with the 61st Primetime Emmy Awards as a music producer and keyboardist for the on-stage band.[2]

In 2014, Paich was invited by producer Gerry Gallagher to record with Latin rock legends El Chicano as well as Alphonse Mouzon, Brian Auger, Alex Ligertwood, Ray Parker Jr., Lenny Castro, Vikki Carr, Siedah Garrett, Walfredo Reyes Jr., Pete Escovedo, Peter Michael Escovedo, Marcos J. Reyes, Salvador Santana, Jessy J, and Spencer Davis and is featured on keyboards and vocals on "Africa" and on three other tracks "Make Love", "Something Got Me Started" and "The Viper" from Gallagher's most recent studio album due out in 2017.

This article uses material from the article David Paich from the free encyclopedia Wikipedia and it is licensed under the GNU Free Documentation License.