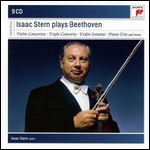 The son of Solomon and Clara Stern,[2] Isaac Stern was born in Kremenets, Poland (now Ukraine), into a Jewish family. He was 14 months old when his family moved to San Francisco in 1921. He received his first music lessons from his mother. In 1928, he enrolled at the San Francisco Conservatory of Music, where he studied until 1931 before going on to study privately with Louis Persinger.[3] He returned to the San Francisco Conservatory to study for five years with Naoum Blinder, to whom he said he owed the most.[4] At his public début on 18 February 1936, aged 15, he played Saint-Saëns' Violin Concerto No. 3 in B minor with the San Francisco Symphony under the direction of Pierre Monteux. Reflecting on his background, Stern once memorably quipped that cultural exchanges between the U.S. and Soviet Russia were simple affairs:

Stern toured the Soviet Union in 1951, the first American violinist to do so. In 1967, Stern stated his refusal to return to the USSR until the Soviet regime allowed artists to enter and leave the country freely. His only visit to Germany was in 1999, for a series of master classes, but he never performed publicly in Germany.[2]

Stern was married three times. His first marriage, in 1948 to ballerina Nora Kaye, ended in divorce after 18 months, but the two of them subsequently remained friends.[6] On 17 August 1951, he married Vera Lindenblit. They had three children together, including conductors Michael and David Stern. Their marriage ended in divorce in 1994 after 43 years. In 1996, Stern married his third wife, Linda Reynolds. His third wife, his three children, and his five grandchildren survived him.[2]

Stern died 22 September 2001 of heart failure in a Manhattan, New York hospital after an extended stay.[2]

In 1940, Stern began performing with Russian-born pianist Alexander Zakin, collaborating until 1977.[7] Within musical circles, Stern became renowned both for his recordings and for championing certain younger players. Among his discoveries were cellists Yo-Yo Ma and Jian Wang, and violinists Itzhak Perlman and Pinchas Zukerman.

Among Stern's many recordings are concertos by Brahms, Bach, Beethoven, Mendelssohn, Sibelius, Tchaikovsky, and Vivaldi and modern works by Barber, Bartók, Stravinsky, Bernstein, Rochberg, and Dutilleux. The Dutilleux concerto, entitled L'arbre des songes ["The Tree of Dreams"] was a 1985 commission by Stern himself. He also dubbed actors' violin-playing in several films, such as Fiddler on the Roof.

Stern served as musical advisor for the 1946 film, Humoresque, about a rising violin star and his patron, played respectively by John Garfield and Joan Crawford. He was also the featured violin soloist on the soundtrack for the 1971 film of Fiddler on the Roof.[9] In 1999, he appeared in the film Music of the Heart, along with Itzhak Perlman and several other famed violinists, with a youth orchestra led by Meryl Streep (the film was based on the true story of a gifted violin teacher in Harlem who eventually took her musicians to play a concert in Carnegie Hall).

In his autobiography, co-authored with Chaim Potok, My First 79 Years, Stern cited Nathan Milstein and Arthur Grumiaux as major influences on his style of playing.

He won Grammys for his work with Eugene Istomin and Leonard Rose in their famous chamber music trio in the 1960s and '70s, while also continuing his duo work with Alexander Zakin during this time. Stern recorded a series of piano quartets in the 1980s and 1990s with Emanuel Ax, Jaime Laredo and Yo-Yo Ma, including those of Mozart, Beethoven, Schumann and Fauré, winning another Grammy in 1992 for the Brahms quartets Opp. 25 and 26.

In 1979, seven years after Richard Nixon made the first official visit by a US President to the country, the People's Republic of China offered Stern and pianist David Golub an unprecedented invitation to tour the country. While there, he collaborated with the China Central Symphony Society (now China National Symphony) under the direction of conductor Li Delun. Their visit was filmed and resulted in the Oscar-winning documentary, From Mao to Mozart: Isaac Stern in China.

Stern maintained close ties with Israel. Stern began performing in the country in 1949.[1] In 1973, he performed for wounded Israeli soldiers during the Yom Kippur War. During the 1991 Gulf War and Iraq's Scud missile attacks on Israel, he played in the Jerusalem Theater. During his performance, an air raid siren sounded, causing the audience to panic. Stern then stepped onto the stage and began playing a movement of Bach. The audience then calmed down, donned gas masks, and sat throughout the rest of his performance.[10] Stern was a supporter of several educational projects in Israel, among them the America-Israel Foundation and the Jerusalem Music Center.[1]

Stern's favorite instrument was the Ysaÿe Guarnerius, one of the violins produced by the Cremonese luthier Giuseppe Guarneri del Gesù.[11] It had previously been played by the violin virtuoso and composer Eugène Ysaÿe.

In 2001, Stern's collection of instruments, bows and musical ephemera was sold through Tarisio Auctions. The May 2003 auction set a number of world records and was at the time the second highest grossing violin auction of all time, with total sales of over $3.3M.[12]

This list of songs or music-related items is incomplete; you can help by expanding it.

Brahms: Trio for Piano, Violin and Cello No. 1 in B Major, op. 8 (with Myra Hess and Pablo Casals)

Barber: Adagio for Strings / Schuman – In Praise of Shahn etc.
Bartók Sonatas for Violin and Piano
Mozart: The Piano Quartets

This article uses material from the article Isaac Stern from the free encyclopedia Wikipedia and it is licensed under the GNU Free Documentation License.

Joseph Marx Alt-Wiener Serenaden
Update Required To play the media you will need to either update your browser to a recent version or update your Flash plugin.