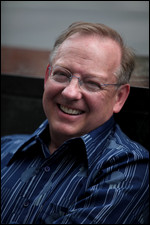 McGegan received his early education at Nottingham High School. He subsequently studied music at Corpus Christi College, Cambridge and at Magdalen College, Oxford. McGegan has participated in some of the earliest "authentic-performance" recordings during the 1970s as a baroque flautist,[2] including Christopher Hogwood's seminal recordings of Mozart symphonies. He has taught music at such UK institutions as King's College, Cambridge, Oriel College, Oxford, and the Royal College of Music. In the USA, McGegan has served as artist-in-residence at Washington University in St. Louis, beginning in 1979 when he was initially scheduled for one semester in residence, but his residency extended into the mid-1980s.[3]

Since 1985, McGegan has been music director of the Philharmonia Baroque Orchestra in San Francisco and Berkeley, California. In 1988, he served as Music Director of the Ojai Music Festival alongside Peter Maxwell Davies and Diane Wittry. From 1993-98 he was Principal Guest Conductor of the Scottish Opera in Glasgow. From 1991 to 2011, McGegan was also Artistic Director of the Göttingen International Handel Festival.[4] He was music director of the Irish Chamber Orchestra from 2002 to 2005. Since 2013 he has been Principal Guest Conductor of the Pasadena Symphony, and in 2014 the became Artist in Association with Australia’s Adelaide Symphony.[5] He has also held long-term appointments with the Drottningholm Theatre, where he served as principal conductor from 1993–96, the Milwaukee Symphony Orchestra, and the Saint Paul Chamber Orchestra. McGegan also founded the chamber music group, The Arcadian Academy.

McGegan has made more than 100 recordings, including many with Philharmonia Baroque and singers such as Lorraine Hunt Lieberson and Lisa Saffer, for such labels as Philharmonia Baroque Productions[7] and harmonia mundi usa. He was nominated for a Grammy Award for his 2011 release on the orchestra's label of the Symphonies nos. 88, 101, and 104 of Joseph Haydn. He has collected a number of honors, including: an honorary degree from the Royal College of Music in London; the Handel Music Prize from the Handel Festival in Halle, Germany; the honorary medal of the Friends of the Drottningholm Theatre; the Order of Merit of the State of Lower Saxony (Germany); the Medal of Honor of the City of Göttingen, and a declaration of Nicholas McGegan Day, by the Mayor of San Francisco in recognition of his work with Philharmonia Baroque. He was appointed Officer of the Order of the British Empire (OBE) in the 2010 Birthday Honours.[8]

This article uses material from the article Nicholas McGegan from the free encyclopedia Wikipedia and it is licensed under the GNU Free Documentation License.