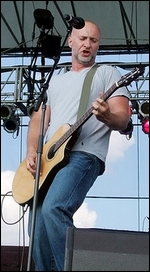 Robert Arthur "Bob" Mould (born October 16, 1960) is an American musician, principally known for his work as guitarist, vocalist and songwriter for alternative rock bands Hüsker Dü in the 1980s and Sugar in the 1990s.

Born in Malone, New York, Mould lived in several places, including the Minneapolis-St. Paul area where he then attended Macalester College. There, he formed Hüsker Dü in the late 1970s, with drummer/singer Grant Hart and bass guitarist Greg Norton.

Hüsker Dü first gained notice as a punk rock group with a series of recordings on the independent label SST Records. One of the first 1980s underground bands to sign a contract with a major record label (Warner Bros. Records), Hüsker Dü found only moderate commercial success, but were later often cited as one of the key influences on 1990s alternative rock.

In the late 1980s, Hüsker Dü broke up acrimoniously amid members' drug abuse and personal problems. Mould and Grant Hart, the band's other songwriter and vocalist, still take occasional jabs at each other in the press, though the two revisited their Hüsker Dü back catalog together at a 2004 benefit concert for an ailing friend, the late Karl Mueller of Soul Asylum.

In 1993, he contributed the track "Can't Fight It" to the AIDS-Benefit Album No Alternative produced by the Red Hot Organization.

In 1994, he recorded "The Turning Of The Tide" for Beat The Retreat, a tribute album to the English guitarist and songwriter Richard Thompson.

Mould also started a record label, Singles Only Label, which released singles from up and coming bands such as Grant Lee Buffalo and R. Stevie Moore.

Mould then formed the group Sugar, a college/alternative radio favorite in the mid-1990s. Along with extensive touring, Sugar released two albums, an EP and a B-sides collection before breaking up.

Mould returned to solo recording, releasing a self-titled album in 1996 (which is often referred to as Hubcap because of the cover photo) and 1998's The Last Dog and Pony Show.

During a stint living in New York City in the late-1990s, Mould's tastes took a detour into dance music and electronica. Those influences were clear on his 2002 release Modulate, which featured a strong electronica influence to mixed critical reviews. To pursue this sound, Mould also began recording under the pseudonym LoudBomb (an anagram of his name). He has released one CD so far under this name.

Mould took a brief break from the music world to get involved with another passion of his, professional wrestling, when he joined WCW as a scriptwriter in 1999 for a brief period.[1] Creative differences with some of the other writers led to Mould leaving the company and returning to music. The liner notes for Modulate thank some of the wrestlers he associated with, most notably Kevin Nash and Kevin Sullivan.

In addition to his solo work, Mould is also a live DJ in collaboration with Washington DC-area dance music artist Richard Morel, under the collective banner Blowoff (frequently staged at the 9:30 Club in Washington, DC). A recording under that banner was released in September 2006. Mould has been asked to do remixes for a variety of dance and alternative rock artists. A recent remix of the Interpol song "Length of Love" has led to more critical acclaim for the veteran artist.

For much of the 1990s, Mould toured playing solo acoustic renditions of his catalog (occasionally switching to electric guitar midway through his set). In 2005 his solo album Body of Song was cross-announced with his first band tour since 1998. Brendan Canty, best known as the drummer for Fugazi, and Mould's Blowoff collaborator, Morel, played drums and keyboards, respectively, for the 2005 tour.

District Line, was released February 5, 2008. Little over a year later on April 7, 2009, Mould released his next album entitled Life and Times.[2]

Mould wrote a memoir with Michael Azerrad, the author of Our Band Could Be Your Life and Come as You Are: The Story of Nirvana. The book, See a Little Light: The Trail of Rage and Melody, was released in June 2011.[3]

Mould performs on the Foo Fighters 2011 album Wasting Light, contributing guitar and vocals to the track "Dear Rosemary." He has made sporadic appearances with the band during their Wasting Light tour to perform the song on stage.

On November 21, 2011, musicians such as Dave Grohl, Britt Daniel of Spoon, Craig Finn and Tad Kubler of The Hold Steady, Randy Randall and Dean Allen Spunt of No Age, Margaret Cho, Jason Narducy of Telekinesis, Jon Wurster of Superchunk, and Ryan Adams came together at the Walt Disney Concert Hall and played songs from Bob Mould's career. During the concert, Bob discussed a new solo album involving Jason Narducy and Jon Wurster due in 2012 and an extremely limited tour of Sugar's debut album Copper Blue.

Though his homosexuality was previously something of an open secret, Mould was outed in the early 1990s; he is now openly gay.[4] [5]

In April 2004, Mould was a co-organizer of the WEDRock benefit concert for Freedom to Marry. "WedRock" was a play on the word "wedlock". The event raised an estimated $30,000(US). Bob Mould also contributed the song "See a Little Light" to the 2006 album Wed-Rock: A Benefit for Freedom to Marry, an album to support in the legalization of same-sex marriage.[6]

Mould's song "Dog on Fire" is the theme song for The Daily Show. They Might Be Giants perform the current version. On December 19, 1996, Mould made a cameo appearance on The Daily Show Holiday Spectacular in an homage duet of "The Little Drummer Boy" with Mould playing the part of David Bowie to Craig Kilborn's "Bing Crosby".

The song "See a Little Light" has been used more than once in various television applications: It was used in the closing scene of the original un-aired test pilot episode of Buffy The Vampire Slayer, it became one of the principal theme songs for the HBO series The Mind of the Married Man and was also used in a television commercial for TIAA-CREF (August 2007). Mould also composed the theme for the TLC program, In a Fix.

Mould also played lead guitar in the house band for the film of John Cameron Mitchell's Hedwig and the Angry Inch. Mould also participated in a Hedwig tribute album, Wig in a Box, on which he covered the song "Nailed."

In 2000, Mould sang "He Didn't" (written by Stephin Merritt) on The 6ths' album Hyacinths and Thistles.

Mould appeared on an episode of Independent Film Channel's The Henry Rollins Show on June 15, 2007.

This article uses material from the article Bob Mould from the free encyclopedia Wikipedia and it is licensed under the GNU Free Documentation License.