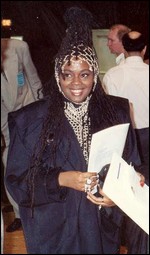 Caron Wheeler (born 19 January 1963) is a British recording artist who gained fame by writing and singing the lead vocals on the two biggest hits for Soul II Soul, "Keep on Movin'"[1] and "Back to Life (However Do You Want Me)". She also was a backing vocalist for Elvis Costello in 1983, The Special AKA in 1984 (singing background vocals on the hit single Free Nelson Mandela) and Howard Jones in 1985. She also provided backing vocals for a track on Erasure's album, The Innocents in 1988. She was a member of the female trio Afrodiziak.

Wheeler was also a founder member of the female vocal group Brown Sugar, along with vocalist Kofi. The two were re-united in October 2005 at the Metropolitan Black Police Association's annual gala at The Barbican in London.

After her success with Soul II Soul, Wheeler embarked on a solo career, and released two albums: UK Blak (1990) and Beach of the War Goddess (1993). Her biggest solo success single is "Livin' In The Light" from her first solo album, which hit No. 53 on the Billboard Hot 100 and spent a week at No. 1 on the Hot Dance Music/Club Play chart in 1989. It also reached No. 14 in the UK Singles Chart.[2]

Wheeler's only other solo Top 40 hit single was the title track from UK Blak.[2] She also featured with Soul II Soul on the soundtrack to the Angela Bassett movie, How Stella Got Her Groove Back in 1998. More recently, Wheeler featured on Richard X's 2003 album, Richard X Presents His X-Factor Vol. 1.

In 2003, she also contributed the track "Another Star" to the Stevie Wonder tribute album "Conception - An Interpretation of Stevie Wonder's Songs."

During the 1980s, she was a member of the female vocal quartet Afrodiziak, and sang on records by Madness, Elvis Costello, and Dexys Midnight Runners, among others.

She is reportedly working on a new solo album to be released in 2014. She is also back in the recording studio with Jazzie B recording tracks for a new Soul II Soul album for a 2014 release.

This article uses material from the article Caron Wheeler from the free encyclopedia Wikipedia and it is licensed under the GNU Free Documentation License.