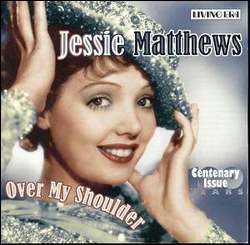 Jessie Margaret Matthews was born in a flat behind a butchers shop at 94 Berwick Street, Soho, London,[1] in relative poverty, the seventh of sixteen children (of whom eleven survived) of a fruit-and-vegetable seller.[2] She took dancing lessons as a child in a room above the local public house at 22 Berwick Street.[3]

She went on stage on 29 December 1919, aged 12, in Bluebell in Fairyland, by Seymour Hicks, music by Walter Slaughter and lyrics by Charles Taylor, at the Metropolitan Music Hall, Edgware Road, London, as a child dancer; she made her film debut in 1923 in the silent film The Beloved Vagabond.

Matthews was in the chorus in Charlot's Review of 1924 in London. She went with the show to New York, where she was also understudy to the star, Gertrude Lawrence. The show moved to Toronto, and when Lawrence fell ill she took over the role and was given great reviews. Matthews was acclaimed in the United Kingdom as a dancer and as the first performer of numerous popular songs of the 1920s and 1930s, including "A Room with a View" by Noël Coward and "Let's Do It, Let's Fall in Love" by Cole Porter. After a string of hit stage musicals and films in the mid-1930s, Matthews developed a following in the USA, where she was dubbed "The Dancing Divinity". Her British studio was reluctant to let go of its biggest name, which resulted in offers for her to work in Hollywood being repeatedly rejected.

Matthews' fame reached its initial height with her lead role in Charles B. Cochran's 1930 stage production of Ever Green, premiered at the Alhambra Theatre Glasgow, a musical by Rodgers and Hart that was partly inspired by the life of music hall star Marie Lloyd, and her daughter's tribute act resurrection of her mother's acclaimed Edwardian stage show as Marie Lloyd Junior. At its time Ever Green, which included the first major revolving stage in Britain,[4] was the most expensive musical ever mounted on a British stage. The 1934 cinematic adaptation featured the newly composed song Over My Shoulder which was to go on to become Matthews' personal theme song, later giving its title to her autobiography and to a 21st-century musical stage show of her life.[5]

Her distinctive warbling voice and round cheeks made her a familiar and much-loved personality to British theatre and film audiences at the beginning of World War II, but her popularity waned in the 1940s after several years' absence from the screen followed by an unsatisfactory thriller, Candles at Nine. Post-war audiences associated her with a world of hectic pre-war luxury that was now seen as obsolete in austerity-era Britain.[6]

After a few false starts as a straight actress she played Tom Thumb's mother in the 1958 children's film, and during the 1960s found new fame when she took over the leading role of Mary Dale in the BBC's long-running daily radio soap, The Dales, formerly Mrs Dale's Diary.

Live theatre and variety shows remained the mainstay of Matthews' work through the 1950s and 1960s, with successful tours of Australia and South Africa interspersed with periods of less glamorous but welcome work in British provincial theatre and pantomimes. She became a stalwart nostalgia feature of TV variety shows such as The Night Of A Thousand Stars and The Good Old Days.

Jessie Matthews was awarded an OBE in 1970 and continued to make cabaret and occasional film and television appearances through the decade including one-off guest roles in the popular BBC series Angels[7] and an episode of the ITV mystery anthology Tales of the Unexpected.[8] She memorably played Wallis Simpson's "Aunt Bessie" Merriman in the 1978 Thames TV series "Edward and Mrs Simpson".

She took her one-woman stage show to Los Angeles in 1979 and won the United States Drama Logue Award for the year's best performance in concert.

In 1926 she married the first of her three husbands, actor Henry Lytton, Jr., the son of singer and actress Louie Henri and Sir Henry Lytton the doyen of the Savoy Theatre. They divorced in 1929.

Matthews had several romantic relationships conducted in the public eye, often courting controversy in the newspapers. The most notorious was her relationship with the married Sonnie Hale. A high-court judge denounced her as an "odious"[9] individual when her love letters to Hale were used as evidence in the case of his divorce from his wife, actress/singer Evelyn 'Boo' Laye.[10][11]

It took some time for Matthews' popularity to recover from this scandal. "If I ceased to be a star", she wrote in a piece for Picturegoer in 1934, "all that interest in my home life would evaporate, I believe. Perhaps it is the price one has to pay for being a star".[12]

Her second and longest marriage was to actor-director Sonnie Hale; the third to military officer, Lt. Brian Lewis, both marriages ending in divorce.

With Hale she had one adopted daughter, Catherine Hale-Monro, who married Count Donald Grixoni on 15 November 1958; they eventually divorced but she remained known as Catherine, Countess Grixoni.

Matthews suffered from periods of ill-health throughout her life and eventually died of cancer, aged 74. She is buried at St Martins Church, Ruislip [13]

For a number of years, British film exhibitors voted her among the top ten stars in Britain at the box office via an annual poll in the Motion Picture Herald.

Matthews was the subject of This Is Your Life in 1961, and a posthumous biography from the BBC's 40 Minutes (1987), Catch A Fallen Star.

A memorial plaque on her childhood dance venue, 22 Berwick Street, Soho, was unveiled on 3 May 1995 by Andrew Lloyd Webber and Ruthie Henshall.[3]

This article uses material from the article Jessie Matthews from the free encyclopedia Wikipedia and it is licensed under the GNU Free Documentation License.