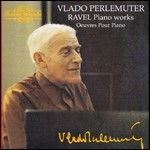 Vlado Perlemuter (26 May 19044 September 2002) was a Lithuanian-born French pianist and teacher.

Vladislas (Vlado) Perlemuter was born to a Polish Jewish family, the third of four sons, in Kovno, Russia (now Kaunas in Lithuania). At the age of three, he lost the use of his left eye in an accident.

His family settled in France in 1907. In 1915, only 10 years old, he was accepted by the Paris Conservatoire, studying first with Moritz Moszkowski (191517) then with Alfred Cortot. At 15, he graduated from the Conservatoire, where he won the First Prize playing Gabriel Faurés Thème et variations before the composer, although Fauré was already deaf by that time). In 1925 he met Maurice Ravel, and in 1927 studied all of Ravel's solo works for piano with the composer himself for a period of six months. Thereafter, he became one of the leading exponents of Ravel's music. In 1929 in two public recitals both attended by the composer, Perlemuter played Ravel's complete piano works, a feat he repeated in 1987 at Londons Wigmore Hall to mark the 50th anniversary of Ravels death.

He never played contemporary music other than Ravel's, except for Sergei Prokofiev's Piano Concerto No. 3.

His fascination for the artistic works of Charles Dickens, William Shakespeare, William Turner and John Constable brought him to England in the early 1930s, and he returned frequently for concerts. He gave his first Wigmore Hall recital in 1938. During World War II, as a Jew he was in danger in Nazi-occupied France, and was hunted by the Gestapo, barely managing to escape to Switzerland, where he lived until 1949. In 1951 he joined the teaching staff of the Paris Conservatoire, where he remained until 1977. Students from around the world, such as Catherine Thibone, Claudio Herrera and Christian Zacharias, were also attracted by his fame as a pedagogue.

In 1958 Perlemuter was invited to the Dartington Summer School of Music in Devon, and he returned many times. He also taught at the Yehudi Menuhin School. His dictums included that a pianist must pedal not with the foot but with the ear; and must be able to make a crescendo without hurrying, and a diminuendo without slowing down. His art is characterized by shimmering tonal colours and a singing legato combined with an effortless ease of interpretation. Those who heard him live say that his playing was characterized by an enchantingly subtle tone that recordings fail to capture fully. He approached new pieces through the left hand, reading the piece from the bass upwards. He always practised slowly, focusing on each hand separately.

His international career spanned over seventy years and he appeared worldwide. He recorded the complete Mozart sonatas, the entire piano works of Ravel, as well as works by Chopin, Beethoven, Mendelssohn, Schumann, Liszt and Fauré. He gave his final concerts at the age of 89, with a valedictory all-Ravel recital at the Victoria Hall in Geneva. He died in 2002 at the age of 98.

This article uses material from the article Vlado Perlemuter from the free encyclopedia Wikipedia and it is licensed under the GNU Free Documentation License.