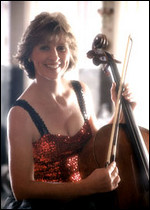 Kliegel was born in Dillenburg, Hesse. She studied under Janos Starker starting at the age of 19. She won first prize at the American College Competition, First German Music Competition and Concours Aldo Parisot, and was also the Grand Prize winner at the second Mstislav Rostropovich International Cello Competition in 1981.[1]

Russian composer Alfred Schnittke recognized her interpretation as the standard recording of his work when she recorded his First Concerto for Cello and Orchestra in 1990. On top of this, she has done many recordings for Naxos, including concertos and other cello works by Beethoven, Bloch, Brahms, Bruch, Dohnányi, Dvořák, Elgar, Lalo, Saint-Saëns, Shostakovich, Schumann, Tavener and Tchaikovsky. She has also recorded a large volume of chamber music by Brahms, Chopin, Demus, Gubaidulina, Kodály, Mendelssohn and Schubert. She will soon be recording Beethoven's complete works for cello and piano, Haydn's cello concertos and Bach's solo cello suites.

She formerly played a Stradivarius, which has become known as the ex-Gendron, for the famous French cellist Maurice Gendron.[2] Currently, she performs on a cello made by Carlo Tononi in Venice c. 1730.

Since 1986 she has taught a master class at the Hochschule für Musik Köln.

This article uses material from the article Maria Kliegel from the free encyclopedia Wikipedia and it is licensed under the GNU Free Documentation License.