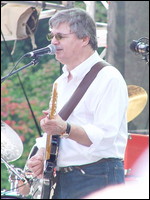 Steven H. "Steve" Miller (born October 5, 1943)[1][2] is an American guitarist and singer-songwriter who began his career in blues and blues rock and evolved to a more pop-oriented sound which, from the mid-1970s through the early 1980s, resulted in a series of highly popular singles and albums.

Born in Milwaukee, Wisconsin, young Steve received his first exposure to music from his mother, Bertha, whom he described as a remarkable non-professional jazz-influenced singer, and his physician father, George, known as "Sonny" who, in addition to his profession as a pathologist, was a jazz enthusiast and accomplished amateur recording engineer. Moreover, guitar virtuoso Les Paul and his musical partner Mary Ford were regular visitors at the Miller house, and Dr. and Mrs. Miller were best man and maid of honor at their December 1949 wedding.[3] Les Paul heard Steve, who was about five, on a wire recording made by Dr. Miller, as the youngster was "banging away" on a guitar given to him by his uncle, Dr. K. Dale Atterbury.[4] Paul encouraged the little musician to continue with his interest in the guitar ... and "perhaps he will be something one day."

In 1950 the family relocated to Texas and Steve, who was nearly seven, began attending Dallas' St. Mark's School, a non-sectarian preparatory day school for boys where, about eight years later, he formed his first band, "The Marksmen". He taught older brother Buddy, the only child in the family with a driver's license, to play the bass and also instructed classmate and future musical star, Boz Scaggs, a few guitar chords so that he could join the band. After leaving St. Mark's"I got kicked out", he recalled with a laugh in a 2004 interview[5]he then attended a school in the Lakewood area of Dallas, Woodrow Wilson High School, from which he graduated in 1961. He was inducted into Woodrow's Hall of Fame in 2009. Another member is Dusty Hill of ZZ Top.

In 1962,[6] Miller returned to Wisconsin, and entered the University of WisconsinMadison, where he formed The Ardells. Scaggs joined the Ardells the next year, and Ben Sidran became the band's keyboardist in the following year.[7] After attending the University of Copenhagen in Denmark for a semester in his senior year to study comparative literature,[2] he dropped out six credit hours shy of a literature degree, opting to pursue a music career with his mother's encouragement and his father's misgivings:

[Interviewer:] When you look back over the span of your career, what are the lasting moments, the sweetest highs?

[Miller:] I would have to say my father's relationship with Les Paul and T-Bone Walker when I was young. Growing up in Dallas, being part of that phenomenal music scene. I found a way to do what I really wanted to do, which is so important for a kid. Near the end of college, my parents said, 'Steve, what are you going to do?' I said, 'I want to go to Chicago and play the blues.' My father looked at me like I was insane. But my mom said, 'You should do it now.' So I went to Chicago. And that was a special time. I played with Muddy Waters and Howlin' Wolf. I got to work with adults and realized music was what I wanted to do, what I loved.[5]

Upon his return to the United States, Miller moved to Chicago where he immersed himself in the city's blues scene. During his time there, he worked with harmonica player Paul Butterfield and jammed with blues greats Muddy Waters, Howlin' Wolf and Buddy Guy, all of whom offered the young guitarist encouragement to pursue a musical career.[7] In 1965, Miller and keyboardist Barry Goldberg formed the Goldberg-Miller Blues Band and began playing on the Chicago club scene.[3] They signed with Epic Records and released a single, "The Mother Song", and soon began a residency at a New York City blues club.[7]

When Miller returned from New York, he was disappointed by the state of the Chicago blues scene, so he moved to Texas in hopes finishing his education at the University of Texas at Austin. He was disenchanted with academic politics at the University, so he took a Volkswagen Bus his father had given him and headed to San Francisco. Upon arrival, he used his last $5 to see the Butterfield Blues Band and Jefferson Airplane at the Fillmore Auditorium. Miller fell in love with the vibrant San Francisco music scene and decided to stay.

In 1966, he formed the Steve Miller Band (at first called The Steve Miller Blues Band), with Miller also handling vocals. Billed as The Miller Band, they backed Chuck Berry on his Live at Fillmore Auditorium album released that year. In 1968, they released an album, Children of the Future,[7] the first in a series of discs rooted solidly in the psychedelic blues style that then dominated the San Francisco scene. Writing in Crawdaddy!, Peter Knobler called the album "a triple moment of experience, knowledge, inspiration".[8] Boz Scaggs rejoined Miller for this album and the next one, before starting his solo career.

The group followed the release of their second album, Sailor, with the albums Brave New World, Your Saving Grace and Number 5. These first five albums performed respectably on the U.S. Billboard 200 chart but failed to yield a major hit single; the highest charted single being "Livin' in the USA" from Sailor. Songs from this period are also featured in a portion of the double album compilation Anthology, which includes a guest appearance on bass guitar, drums and backing vocals by Paul McCartney on the songs "Celebration" and "My Dark Hour."

In this first period Miller established his personae of the "Gangster of Love" (from Sailor)[7] and the "Space Cowboy" (from Brave New World), which were reused in later works. In 1972, Miller recorded the album Recall the Beginning...A Journey from Eden, in which a third persona, "Maurice," was introduced in the tune "Enter Maurice."

In 1973, The Joker marked the start of the second phase of Miller's career: this work was less hard-rock oriented and simpler in composition. The album received significant radio airplay, which helped the title track reach number one on the Billboard Hot 100 chart. The single also hit No 1 on the UK Singles Chart in September 1990 after it was used for a television commercial.[7]

Miller followed up with Fly Like an Eagle in 1976, and Book of Dreams in 1977. (The songs for both had been recorded at the same time, and released over two single albums rather than one double-album.) This pair of albums represented the peak of Miller's commercial career, both reaching the top echelons of the album charts and spawning a lengthy series of hit singles, including "Fly Like An Eagle", "Rock'n Me", "Take the Money and Run", "Jet Airliner" and "Jungle Love".[7] The Steve Miller Band co-headlined a major stadium tour with the Eagles in 1978.

Although the Steve Miller Band had limited peak commercial success, his ongoing popularity has been notable. In 1978, Greatest Hits 1974-1978 was released, featuring the big hits from his two most popular albums, Fly Like an Eagle and Book of Dreams along with the title track from The Joker. This popularity also fueled successful concert tours throughout the 1980s and 1990s, often with large numbers of younger people being present at the concerts, many of whom were fans of the big hits and inevitably purchased the greatest hits album. Miller would often headline shows with other classic rock acts, and played a variety of his music, including a selection of his blues work dating from the late 1960s.

Miller developed a high degree of music business acumen. Aware that songs earn individual publishing royalties no matter what their length, he separated the 57-second electronic introduction from the song "Sacrifice" on Book of Dreams, named it "Electro Lux Imbroglio" and published it separately, earning thousands of extra dollars as a result. On the heels of this massive success, Miller took a long hiatus from recording and touring, emerging in 1981 with Circle of Love. Sales were disappointing, however, and in 1982 he returned to the pop formula with another hit album, Abracadabra.[7] This was Miller's last great commercial success; a series of collections, live albums and attempts to find a new style appeared in 1984 (Italian X-Rays), 1986 (Living in the 20th Century) and 1988 (Born 2B Blue). He released Wide River in 1993, which was his only studio release of new material between 1988 and 2010.

In 2009, Miller was inducted into the Woodrow Wilson High School Hall of Fame.

Miller released Bingo! on June 15, 2010. The album of blues covers, issued through his own Space Cowboy label in partnership with Roadrunner/Loud & Proud Records, was his first studio album release since 1993.[9][10] Let Your Hair Down, a companion release to Bingo!, was released 10 months later (on April 18, 2011).[11]

For the 2010-1 school year, Miller was an Artist in Residence at the USC Thornton School of Music, where he taught students in the Popular Music and Music Industry programs.[12]

This article uses material from the article Steve Miller (musician) from the free encyclopedia Wikipedia and it is licensed under the GNU Free Documentation License.