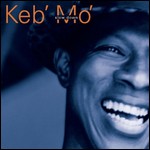 Keb' Mo' (born Kevin Moore, October 3, 1951) is a three-time American Grammy Award-winning blues musician. He is a singer, guitarist, and songwriter, currently living in Nashville, Tennessee with his wife Robbie Brooks Moore. He has been described as "a living link to the seminal Delta blues that travelled up the Mississippi River and across the expanse of America."[1] His post-modern blues style is influenced by many eras and genres, including folk, rock, jazz and pop. The moniker "Keb Mo" was coined by his original drummer, Quentin Dennard, and picked up by his record label as a "street talk" abbreviation of his given name.

From early on, he had an appreciation for the blues and gospel music. By adolescence, he was already an accomplished guitarist.[2]

Keb' Mo' started his musical career playing the steel drums and upright bass in a calypso band. He moved on to play in a variety of blues and backup bands throughout the 1970s and 1980s. He first started recording in the early 1970s with Jefferson Airplane violinist Papa John Creach through an R&B group. Creach hired him when Moore was just twenty-one years old; Moore appeared on four of Creach's albums: Keb Mo's first gold record was received for a song he did with Papa John on Jefferson Starships Red Octopus Filthy!, Playing My Fiddle for You, I'm the Fiddle Man and Rock Father.

Around that time Moore was also a staff writer for A&M Records, and arranged demos for Almo - Irving music. Keb' Mo's early debut, Rainmaker, was released on Chocolate City Records, a subsidiary of Casablanca Records, in 1980. He was further immersed in the blues with his long stint in the Whodunit Band, headed by Bobby "Blue" Bland producer Monk Higgins. Moore jammed with Albert Collins and Big Joe Turner and emerged as an inheritor of a guarded tradition and as a genuine original.

In 1994, Keb' Mo' released his self-titled debut album, Keb' Mo', which featured two Robert Johnson covers, "Come On In My Kitchen" and "Kind Hearted Woman Blues".[3] In the Martin Scorsese miniseries The Blues, Keb' Mo' states that he was greatly influenced by Johnson. Keb was the runner-up for Best New Blues Artist at The Long Beach Blues Festival when he was spotted by Steve LaVere who owns the publishing for the entire Robert Johnson song catalogue (1992-93)

Keb Mo's self-titled album was released on Okeh Records a vintage revival division of Sony Music. In 1996, he released Just Like You, his second album, which featured twelve songs full of Delta rhythms. He won his first Grammy Award for this album, which featured guest appearances from Jackson Browne and Bonnie Raitt.[4]

On June 10, 1997, Moore performed on the television program Sessions at West 54th. He joined musicians Laval Belle on drums, Reggie McBride playing bass, and Joellen Friedkin on keyboards to perform fourteen songs, some from each of his albums. Blues pianist Dr. John also made a guest appearance. This session (known as Sessions at West 54th: Recorded Live in New York) was shown on television, but was not released as a DVD until late 2000.

Slow Down, his next album, was released in 1998 and featured twelve songs. It earned him a second Grammy Award. The album begins with the song "Muddy Water", a tribute to Muddy Waters. It also features a song entitled "Rainmaker", which had been released previously on his first album, eighteen years prior. The song was rerecorded, though there is little difference to the song itself with no lyrical changes at all.

His fourth album, The Door, was released in 2000. The same year, Keb' Mo' released Big Wide Grin, a children's album featuring many songs from Moore's own childhood, along with some newer children's songs and some by Moore himself. The album includes an original arrangement of "America the Beautiful," which he performed years later on the 2006 series finale of The West Wing, "Tomorrow," in which he appears as himself to perform the song at the inauguration of (fictional) President Matt Santos.

In 2001, he appeared on Sesame Street with Kermit the Frog, Grover, Elmo, and other muppets performing the song "Everybody be Yo'self".

In 2003, Martin Scorsese collaborated with many blues musicians including Keb' Mo' to put together a series of films entitled The Blues. Following its release, several albums were released in accordance, some were compilations, some new collaborations, and Keb' Mo' released an album in the series featuring a handful of existing recordings from Keb' Mo' to The Door.

On February 10, 2004, he released Keep It Simple which earned him a third Grammy Award, again in the contemporary blues genre. Later that year he released his sixth studio album, Peace... Back by Popular Demand.

On October 20, 2009, Keb' Mo' released the live album, Live & Mo'. Keb Mo has appeared on stage(1990-1993) in several versions of the Musical "Spunk" as Guitar Man, a play by Zora Neale Hurston a legendary African American playwright from the Harlem Renaissance. His character, learned while he was an understudy to "Chick Streetman" played all the actual music in the play while performing. The character of Guitarman is the foundation for his current stage persona.

In 1998, he portrayed Robert Johnson in a documentary film, Can't You Hear the Wind Howl?[6]

In 1997, Keb' Mo' portrayed the character Isaac, the Angel of Music, in the episode "Inherit the Wind" and again in 1999 in "Then Sings My Soul" of the television series Touched by an Angel. He performed "Hand It Over" from his 1996 release Just Like You in the 1997 episode and again in the 2002 episode "Remembering Me: Part 2". He also appeared as J. D. Winslow in the 2001 episode "Shallow Water", where he performed his song "God Trying to Get Your Attention" from his album Slow Down.

In January 2007, he performed at the Sundance Film Festival.[7]

He played the role of the mischievous spirit Possum in the 2007 John Sayles movie Honeydripper.

In 2004, he participated in the politically motivated Vote for Change tour alongside Bonnie Raitt and Jackson Browne, with whom he originally recorded the title track from the album Just Like You.

Keb' Mo' is part of the No Nukes group which was against the expansion of nuclear power. In 2007, the group recorded a music video of a new version of the Buffalo Springfield song "For What It's Worth".[8][9]

Keb' Mo' uses several types of guitars, including electric guitars, acoustic guitars and resonator guitars. He has a preference for red guitars, as he says on his website : "I have a history with red guitars. My first electric was a red guitar.". He mostly plays on a red custom Fender Stratocaster which has the particularity to feature two single-coil pickups, and one humbucker and was much modified from a regular Stratocaster model. On stage, he prefers a red Hamer guitar with Gibson P-100 pickups. Two of his electric guitars were lost in the 2010 Nashville flood : an Epiphone Sheraton and a Danelectro Selectomatic.[10]

In 1998, he appeared on the album "Begegnugen" (the German word for "Encounters") of Peter Maffay, one of the most successful Rockstars in Germany and Mid-Europe (16 Number 1 albums in the german Album Charts). This record is a duets album with artists from every continent. Moore and Maffay make a new version of "Am I wrong".

In 2002, Moore contributed "Sonnet 35" to the compilation album, When Love Speaks (EMI Classics), which features famous actors and musicians interpreting Shakespearean sonnets and play excerpts. Two years later, he appeared on Amy Grant: Greatest Hits 1986-2004 in a duet entitled "Come Be with Me", which became a modest success on pop radio.

In 2005, he appeared on Buddy Guy's version of "Ain't No Sunshine", along with Moore composed one of the theme songs featured on the show, Martha Stewart Living. That same year, he appeared on Eric Clapton's album Back Home. In 2006, he co-wrote the song, "I Hope", with the Dixie Chicks for their album, Taking the Long Way.

In 2008, he also appeared on Otis Taylor's album "Recapturing the Banjo," contributing vocals and banjo on several songs.

Moore covered Lowen & Navarro's "If You Loved Me Like That" on Keep the Light Alive : Celebrating the Music of Lowen & Navarro. The proceeds of the album benefited The Eric Lowen Trust, ALS Association Greater Los Angeles, and Augie's Quest.

Moore sings the opening theme ("I See Love", written by Moore and Josh Kelley) to the CBS sitcom Mike & Molly.

Moore appeared and played as a backing musician on an episode of Memphis Beat in 2011.

Moore produced and co-wrote the song "Diggin' in the Deep Blue Sea" on the 2011 David Bromberg album Use Me. He also plays electric guitar on the track.

This article uses material from the article Keb' Mo' from the free encyclopedia Wikipedia and it is licensed under the GNU Free Documentation License.