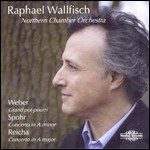 Wallfisch was born into a family of distinguished musicians, his father the pianist Peter Wallfisch and his mother the cellist Anita Lasker-Wallfisch, who is one of the last known surviving members of the Women's Orchestra of Auschwitz. He studied under teachers including Amaryllis Fleming, Amedeo Baldovino, Derek Simpson and Gregor Piatigorsky. He is a prizewinner at the International Gaspar Cassadó Cello Competition in Florence. He has been appointed to the faculties of the Konservatorium Zürich Winterthur and the Musikhochschule Mainz.

Wallfisch has recorded on the EMI, Chandos, Black Box, ASV, Naxos and Nimbus labels. He has made CD recordings of almost the entire cello repertoire, including works by Britten, Finzi, Leighton, Shostakovich, Bloch, Ravel, Busch, Schumann, Zemlinsky and Tchaikovsky. He has recorded a wide range of British cello concertos, including works by James MacMillan, Finzi, Delius, Walton, Bax, Bliss, Britten, Moeran and Leighton.

Raphael plays a 1760 Gennaro Gagliano and the 1733 Domenico Montagnana "Ex-Romberg".

His wife is the Australian Baroque violinist Elizabeth Wallfisch.[2] His sister is the psychotherapist Maya Jacobs-Wallfisch. He has three children, the conductor and Hollywood composer Benjamin, the baritone (and cellist) Simon, and vocalist Joanna.

This article uses material from the article Raphael Wallfisch from the free encyclopedia Wikipedia and it is licensed under the GNU Free Documentation License.