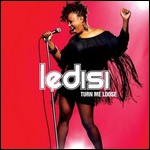 Ledisi Anibade Young /ldsi/ (born March 28, 1972) is an eight-time Grammy-nominated American singer–songwriter and actress. Her first name means "to bring forth" or "to come here" in Yoruba.[1] Ledisi is known for her jazz influenced vocals. In 1995, Ledisi formed the group known as Anibade. After unsuccessfully trying to get the group signed to a major label, she formed LeSun Records with Sundra Manning. Along with her group Anibade, Ledisi released an album titled Take Time. The album gained major airplay from local radio stations.

In 2000, Ledisi released her first album, titled Soulsinger: The Revival. Ledisi and her group toured in 2001, performing various shows.[1] In 2002, Ledisi released her second album, Feeling Orange but Sometimes Blue. The album won her an award for "Outstanding Jazz Album" at the California Music Awards.

In 2007, Ledisi signed a major record deal with Verve Forecast and released her third album in August of that year, titled Lost & Found, which sold almost 217,000 copies and earned her two Grammy nominations, including one for Best New Artist.[2] In 2008, Ledisi released her Christmas album, It's Christmas.

In 2009, Ledisi released her fourth album Turn Me Loose, which earned her 2 Grammy nominations.

Ledisi grew up in a musical family; her mother sang in a Louisiana R&B band and her stepfather, Joseph Pierce,III, (deceased) was a drummer in the New Orleans area. Her biological father is soul singer Larry Sanders, although he left the family when she was a baby and did not meet again for nearly three decades.[3] Ledisi first began performing publicly at age eight with the New Orleans Symphony Orchestra. She moved to Oakland, California where her music career blossomed. She was nominated for a Shellie award in 1990 for her performance in a production of The Wiz and performed in an extended run with the San Francisco cabaret troupe, Beach Blanket Babylon.[1] She studied opera and piano for five years at University of California Berkeley in their Young Musicians Program.

In the 1990s, she formed a group called Anibade, alongside Sundra Manning (producer, keyboards, songwriting), Phoenix (LaGerald) Normand (background vocals, songwriting), Cedrickke Dennis (guitar), Nelson Braxton (bass), Wayne Braxton (sax), and Rob Rhodes (drums), playing a jazz and hip-hop influenced kind of soul.[1] The group won acclaim in the Bay Area, and recorded a demo, "Take Time" which was played on local stations. Ledisi tried to get the group signed to a major label, but had no luck.

2000-2003: Soulsinger: The Revival and Feeling Orange but Sometimes Blue

During her five year hiatus, Ledisi made appearances on soundtracks. In 2007, she signed with Verve and released "Blues in the Night" which featured on the tribute album, We All Love Ella: Celebrating the First Lady of Song.

In 2008 Ledisi performed the song "The Man I Love" as a blues singer in the Leatherheads movie.

In 2009, Ledisi's fourth studio album was announced to be titled, Turn Me Loose. The album was released on August 18, 2009.[9] Speaking in April 2010 to noted UK R&B writer Pete Lewis - Deputy Editor of the award-winning Blues & Soul - Ledisi explained the album's title reflected its musical diversity: "The title 'Turn Me Loose' is basically me saying 'I don't wanna be boxed in! Let me be myself as a performer and singer, because I do EVERYTHING! Not just one particular style!'."[10] She employed production from seasoned Rhythm and Blues songwriter-producers such as Raphael Saddiq,Jimmy Jam + Terry Lewis, James "Big Jim" Wright & Carvin & Ivan. The first single from this album was 'Goin' Thru Changes'. The second single was chosen to be Higher Than This, produced by Jimmy Jam & Terry Lewis and James "Big Jim" Wright.

On May 13, 2010, Ledisi performed at Charter Oak Cultural Center's [11] 9th Annual Gala, a fundraiser for free after-school youth arts programming in inner-city Hartford.[12] She performed several songs from Turn Me Loose, and also performed a duet with Anika Noni Rose, a tribute to the late Lena Horne.

Ledisi toured with R&B/soul singer Kem on his North American INTIMACY Tour. On March 10, 2011, during her opening act in Atlanta, Georgia, Ledisi announced that she had finished recording her fifth studio album on March 9, 2011. Ledisi's sixth studio album, Pieces of Me, was released on June 14, 2011. It debuted at number 8 on the Billboard 200 Charts, selling 38,000 in its first week. The album's title track served as the album's lead single.

Ledisi has performed at the White House three times at the request of President and First Lady Obama.

Ledisi headlined her first tour to promote her album, Pieces of Me. The Pieces of Me Tour played to 22 sold out shows across North America. With this album, Ledisi received three nominations for the 2012 Grammy Awards, in the categories Best R&B Album, Best R&B Performance and Best R&B Song, for the album and the lead single "Pieces of Me".

Ledisi will release her first book, Better Than Alright: Finding Peace, Love & Power on Time Home Entertainment, Inc. in 2012. The book, an innovative collaboration with ESSENCE, is filled with the singer's personal photos, quotes, lyrics and richly detailed stories of the Grammy nominee's journey to acceptance of her beauty, talent and power.[13]

In December 2012, VH1 announced that Ledisi would perform at their 2012 VH1 Divas show, a concert benefiting the Save The Music Foundation charity. Ledisi performed a Whitney Houston tribute medley with Jordin Sparks and Melanie Fiona.[14]

This article uses material from the article Ledisi from the free encyclopedia Wikipedia and it is licensed under the GNU Free Documentation License.